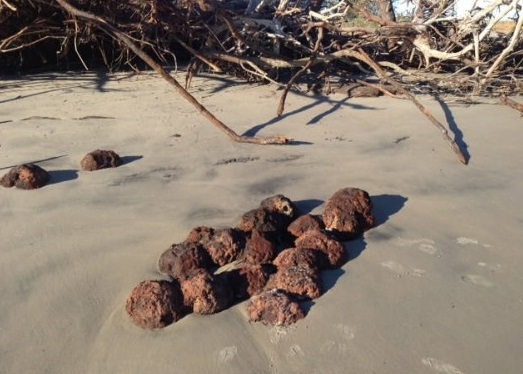 When word circulated that Civil War-era cannon balls had been uncovered on beach south of Charleston following last weekend’s hurricane, I was somewhat surprised.

While the strength of such storms can’t be underestimated, the ability to move, say, a 12- or 24-pound round shell from the bottom of Charleston Harbor onto a beach would be quite a feat.

It appears that the clutch of 16 cannon balls found Sunday on Folly Beach had most likely been in place since the 1861-65 conflict.

“There was a gun emplacement there during the Civil War and this must have been a stack because they were all consolidated together,” John Manzi, who has a home on Little Oak Island, on the other side of Folly, told USA Today.

Manzi said a friend went on to the beach Sunday and found the Civil War-era shells.

Bomb squads successfully detonated most of the shells, which were badly corroded by 150 years of sand and salt.

An official with the area sheriff’s department said a few of the shells were transported to the nearby Navy base.

Maj. Eric Watson, a public information officer with the Charleston County Sheriff’s Office, said his office had to wait for the tide to go down to recover all the ordnance.

“When the tide receded, our guys and members of the US Air Force explosive team used a small amount of C-4 to detonate the cannon balls right there on the beach,” he said.

Fuse holes were noted in at least some of the shells, indicating the ordnance was designed to explode, rather than being solid shot, which was used to batter targets.