No less an authority than Alexander Solzhenitsyn understood that a considerable dissimilarity existed between Russia and the West. He lived in both, saw the good and bad in both and believed both had something to offer mankind.

What he wouldn’t have understood is that a sizeable percentage of Russians hold former Soviet dictator and mass murderer Joseph Stalin in high regard.

Russians have picked Stalin as the greatest figure in history, beating out President Vladimir Putin and poet Alexander Pushkin, according to a poll released today.

The poll, conducted in April by the Levada Centre, asked Russians to pick the greatest individuals of all time.

Stalin came out on top with 38 percent, while Putin shared second place on 34 percent with Pushkin, Russia’s beloved national poet.

Stalin’s predecessor Vladimir Lenin, Tsar Peter the Great and first man in space, Yuri Gagarin, came next in the list, with Soviet leader Mikhail Gorbachev in last place at 6 percent.

Stalin is believed responsible for the deaths of as many as 25 million individuals, some executed during his political purges and many more dying in the Gulag, the vast prison camp systems, or through mass starvation such as the Holodomor.

Stalin was a monster on par with Hitler and Mao, and the fact that more than one-third of Russians consider him the greatest figure in history points out either great deficiencies in the Russian educational system, a voluntary myopia among many Russians regarding their past, or a combination of the two.

(Top: A cemetery for victims of the one of Stalin’s gulags in Vorkuta, in Russia’s Far North.) 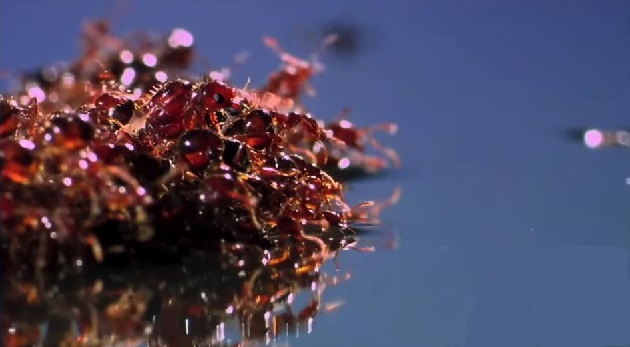 One would think that if a large newspaper company were going to rewrite press releases sent to them – rather than going out and finding news stories – it could do so in an intelligent manner.

A reporter for al.com, which is the website for several publications, including Alabama newspapers the Birmingham News, the Mobile Press-Register and the Huntsville Times, apparently decided the recent arrival of Tropical Storm Cindy, with its potential for flooding, would be a good opportunity to rewrite a release from the Alabama Cooperative Extension System on the dangers of fire ants.

Fire ants, of course, aren’t daunted by flooding, as they ball together by the thousands during floods, making small rafts that enable them to survive for considerable periods until they find dry land.

According to the al.com story, “If a person encounters one of these floating balls of fire ants, it can be seriously bad news, causing potentially serious health problems not to mention many painful bites.”

Anyone living in the South who isn’t aware that a floating mass of fire ants is bad news either just stepped off the plane from an Inuit enclave in northern Canada or has serious short- and long-term memory issues.

And it isn’t the bite of fire ants that is so much bothersome as the other end of the critter; the fire ant has a sharp stinger on its rear, connected to an internal venom sac.

During times of flooding, avoid contact with floating masses of fire ants; and if you are in a rowboat, do not touch the ants with oars.

It’s understood that newspapers cater to a sixth-grade reading level, but even in sixth grade, when I happened to live along the Mississippi River, I knew you didn’t mess with fire ants, never mind a floating mass of the pernicious devils.

To be told to avoid contact with floating masses of fire ants is akin to being instructed not to stare directly into the sun with a pair of high-powered binoculars.

If all this seems nitpicky, remember that the fire ant that today has spread throughout the Southern US, the Southwestern US and California, came into the United States through the port of Mobile in the 1930s. One would expect a story from a site representing in part the Mobile Press-Register to have a pretty good understanding of the facts regarding this invasive and painful nuisance. 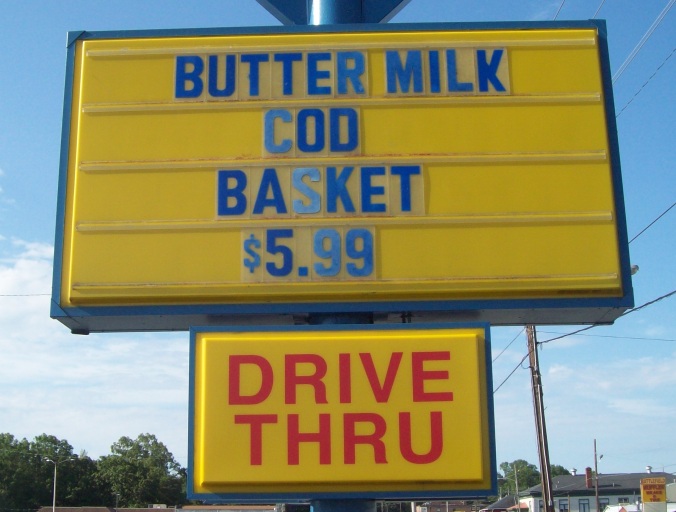 The above sign, spotted at Long John Silver’s in Fort Oglethorpe, Ga., reflects perhaps the greatest offering ever put forth by a fast-food establishment.

As I gazed up at the promotion for the “Butter Milk Cod” basket, my mind began spinning furiously. I’ve never eaten at a Long John Silver’s, which is known for seafood, but if any promotion were to get me inside, this would be it.

“Butter milk cod” held so many possibilities that a simple basket seemed ridiculously inadequate. And for just $5.99? Mind = Blown!

Eventually, tired of trying to work out the many different options in my head, I put pen to paper and created my own “Butter Milk Cod Matrix” (patent pending).

As you can see below, there is an amazing number of delicious and nutritious choices that can be created when one has butter, milk and cod: 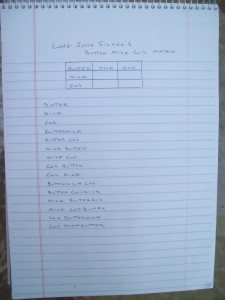 Scanning the list of items created by the intricate matrix, I don’t know that there isn’t anything on it I wouldn’t consume, although I can’t say that cod milk or cod milkbutter would be the first items I would reach for.

Alas, when I finally pulled myself away from the sign and my “Butter Milk Cod Matrix” (patent pending), I was disappointed to find the Fort Oglethorpe Long John Silver’s not yet open.

As I pulled away toward Tennessee, it was with a heavy heat, my new-found craving for cod butter unsatisfied. 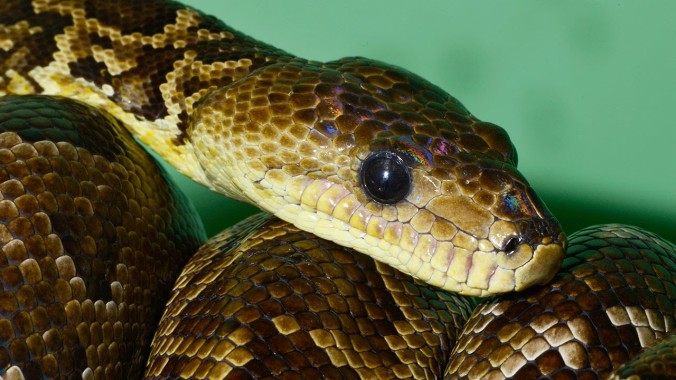 Snakes, central characters in many a nightmare, may have just added to their bad reputations: Researchers have found that some of the slithering reptiles attack in packs.

Cuban boas hunt as a team to increase efficiency, providing evidence of the creature’s intelligence, a University of Tennessee scientist has found.

“Coordinated hunting requires higher behavioral complexity because each animal has to take other hunters’ actions into account,” said Vladimir Dinets, the study author and an assistant research professor in the school’s psychology department.

While increased food consumption is believed to be the main reason for the behavior, it’s also possible there is a social function linked to working together, according to RedOrbit.com.

Snakes have been observed to hunt together previously, but the amount of coordination was questionable, and Dinets’ research is the first scientific recording of such behavior.

A recent much-viewed video by the BBC’s Planet Earth showing a young iguana barely escaping a seemingly endless number of attacking snakes would seem to be evidence of the reptiles working toward the same goal, though necessarily in a coordinated effort.

The new research showed how individual snakes take into account the location of others.

The snakes Dinets studied were hunting fruit bats in Cuba. At dawn and dusk, they positioned themselves around the mouth of the cave in such a way as to increase the chances of catching prey.

“Snakes arriving to the hunting area were significantly more likely to position themselves in the part of the passage where other snakes were already present, forming a ‘fence’ across the passage and thus more effectively blocking the flight path of the prey, significantly increasing hunting efficiency,” an extract from the study explained.

The Cuban boa can reach 6 feet in length, which makes the fact that they hang upside down from the roofs of caves even more remarkable.

“After sunset and before dawn, some of the boas entered the passage that connected the roosting chamber with the entrance chamber, and hunted by suspending themselves from the ceiling and grabbing passing bats,” Dinets said.

Dinets observed that the positions taken up by the snakes lowered the chances of bats getting out of the cave. Brilliantly, those hanging positions also meant they behaved like the bats they were trying to catch, according to RedOrbit.com.

For the 2 percent of us that like snakes, this is fascinating; for everyone else, it’s more fodder for bad dreams. 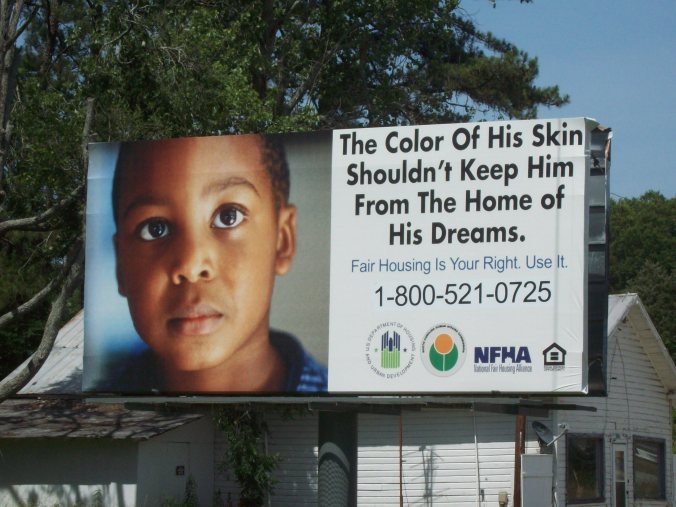 I pass the above billboard, paid for by the National Fair Housing Alliance, each day on my way to work. It brings a number of issues to mind.

(Begin disclaimer.) As a caveat to keep the easily offended from being seized with apoplexy, I understand discrimination still exists. It likely always will. This is not an attempt to diminish or disregard the impact of discrimination in housing. (End disclaimer.)

That said, the billboard is an appeal to emotion, and not a very good one at that.

The average 6-year-old boy’s “dream home,” at least from what I can recall, is a pillow fort made from couch cushions.

Any bank making a loan to a 6-year old would, of course, be hauled before regulators and hit with sanctions, unless the 6-year-old was a pop music wonderkid, ala Michael Jackson, 1965.

Finally, I know of very few recent instances of individuals or organizations discriminating against others when it comes to selling homes. It seems illogical to turn down someone else’s money when you’re trying to sell your home.

A glance at the website for National Fair Housing Alliance – a Washington, DC, operation which touts itself as “the only national organization dedicated solely to ending discrimination in housing” – shows very little actual activity in this area. And it’s safe to say that this organization, begun in 1988, would be promoting such cases in order to rationalize its existence. Under “enforcement” is the following:

That means over the past year, the only activities that this entity has seen fit to post to the “enforcement” section of its website are lawsuits that it has filed. No resolutions of cases. And filing a lawsuit hardly qualifies as “enforcement.”

If one looks at the NFHA’s “news & media” section, one finds press releases for the following:

There are also press releases announcing a settlement between Bank of America and the National Fair Housing Alliance Reach in a mortgage loan case, and the Supreme Court upholding the right of cities to sue banks whose practices harm the municipalities and their residents.

The last two have a direct tie to the NFHA’s mission; the first two seem a bit off the reservation for an organization dedicated to ending discrimination in housing.

“We are one year away from commemorating the 50th Anniversary of the Fair Housing Act which was passed just seven days after the assassination of Dr. Martin Luther King, Jr. in April, 1968,” said Shanna Smith, president and CEO of NFHA. “Some advances have been made in opening up neighborhoods to everyone; however, people of color, persons with disabilities and other marginalized groups continue to be unlawfully shut out of many neighborhoods that provide quality schools and health care, fresh food, employment opportunities, quality and affordable credit, small business investment, and other opportunities that affect life outcomes.”

Some advances? There were many, many neighborhoods from which minorities were excluded in 1968, either de jure or de facto, and there wasn’t a great deal they could do about it. Those that fought against such discrimination were often harassed, and those who dared move into white neighborhoods were many times treated extremely harshly, even violently. Those actions, as near as I can tell, are largely absent today.

Were such actions taking place, the media would highlight them in great detail.

If people of color, persons with disabilities and other marginalized groups are unlawfully shut out of neighborhoods today, there are remedies that authorities are more than willing to employ, and rightfully so.

If, however, groups such as the NFHA feel the need to downplay success in opening up housing opportunities for all so that they can continue to garner funding and have a viable reason to remain in operation, that doesn’t speak very highly about it as an organization.