Modern academia is anachronistic, if nothing else.

The latest trend that appears to be catching on is termed “income-share agreements.”

Schools such as Purdue University, Norwich University and Lackawanna College are offering to pay students’ tuition if students offer them a percentage of their future salary for a fixed number of years, according to an Associated Press report.

In contrast with traditional loans, in which students simply pay down the principal and interest until there is nothing left, students with income-share agreements pay back a percentage of their salary for a set period of time.

Uh, isn’t this just another name for “sharecropping?”

Perhaps universities ought to put a halt to the ongoing building spree which so many are currently engaged in – constructing fiefdoms that would make many a medieval lord envious – and get back to the business of simply educating students. 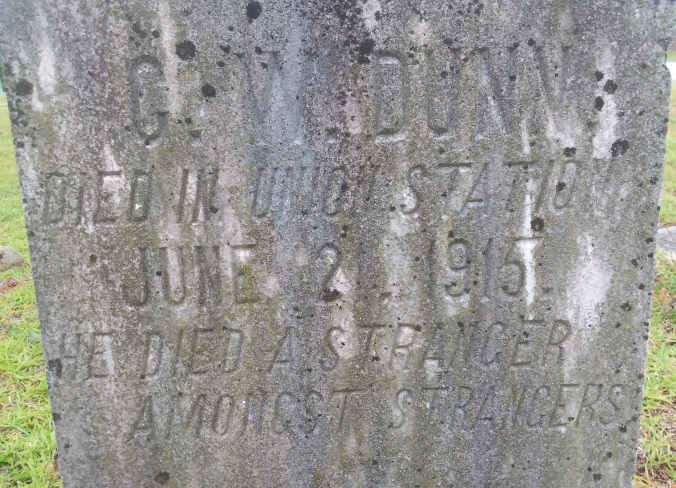 Gravestones are typically vague beyond name and date of birth and death, but if they include and an editorial flourish, most are laudatory. This can come in the form of a familial platitude: Loving husband and father; a religious bent: Asleep in Jesus; or an indication of virtue: Generous of Heart, Constant of Faith.

A few, however, reflect mystery, sadness or even both.

In Newberry, S.C.’s Rosemont Cemetery is an aging tombstone for one G.W. Dunn. It reads:

The search of old newspapers turned up some background on G.W. Dunn, and it is indeed a forlorn story.

Under the headline “Man Suicides in Newberry,” The Newberry Herald and News reported on June 25, 1915, that Dunn killed himself in the city’s train station by drinking carbolic acid. He was subsequently buried in the city, even though he hailed from several hours away.

“(Dunn) had written a note, which he put on his hat, and then stretched himself on the floor with his head on a bench. It was so clear a case of suicide Coroner Lindsay held no inquest,” according to the paper. “Several passengers saw the man lying in the waiting room, but thought nothing of it, until a drummer (salesman) examined the body, having noticed something wrong.”

Being a different era, the contents of the note were released to the press, and detailed in the Herald and News:

“To the City Authorities of Newberry: I am going to kill myself – and there will not be any use in notifying my people, as I would rather they not know anything about this. I want the city to bury me, and after that you can write to A.B. Dunn, Round, S.C. My name is G.W. Dunn.”

Round, S.C., today known as Round O, is located in Colleton County, not too far from Charleston. It was several hours travel from Newberry in 1915, even by train.

The man’s family was contacted, but, according to the story, “the police chief at Walterboro phoned that the man’s people were not able to look after him. They requested that he be buried here.”

He was interred in Rosemont Cemetery the day following his death, with a local minister conducting the service.

That Dunn was down on his luck is apparent. The paper noted that he was about 35 years old, had one leg and went about on crutches.

It didn’t appear Dunn had come to Newberry to end his life. He arrived in town earlier on the day of his death, from Columbia, about 30 miles south, and spent the day looking for work. He had eaten lunch at a downtown restaurant and left a bundle of clothes, saying he would probably return for supper.

“It appears that the unfortunate man had tried to get work here,” according to the paper. “Mr. W.H. Hardeman of the Newbery Cotton Mill says he applied to him for a job, but there was nothing or him to do there, as machinery has supplanted the hand labor the man had been used to. He tried elsewhere for work, but failed.

“In his despondency, lonely and friendless, the crippled stranger within our gates, with poverty and no work staring him in the face, perhaps without a home fit to be called a home, drank poison and died. He was given a decent burial,” the story concluded.

Dunn had 40 cents in pocket when he was found.

More than a century later, one cannot read of Dunn’s death without feeling a twinge of sadness. To end one’s days in a distant town, with one’s family unable or unwilling to foot the expense to have your body returned home inspires melancholy.

G.W. Dunn rests today on knoll in one of the lonelier parts of the cemetery, the heartrending words on his tombstone faded by time. One can only hope that this “stranger” found some measure of peace in the hereafter.