To paraphrase English playwright William Congreve, hell hath no fury like an occupational licensing board catching wind of an “nonprofessional” practicing said profession.

In Arizona, for example, the state board of cosmetology is investigating Juan Carlos Montesdeoca after receiving a complaint that he gave free haircuts to the homeless.

Montesdeoca committed the deeds on Jan. 28 at a downtown Tucson library, after organizing the event through a Facebook group and soliciting help from volunteers. He did it “out of the kindness of my heart,” and in memory of his mother, who loved her hair, he told Tucson News Now.

That didn’t set well with the Arizona State Board of Cosmetology, which began an investigation after it received an anonymous complaint alleging that Montesdeoca was “requesting local businesses and local stylists to help out with free haircuts (unlicensed individuals) to the homeless.”

What one man views as charity another sees as unwanted competition, apparently.

The Arizona board is pulling out its big bag of disjoined logic in an effort to keep Montesdeoca and other “do-gooders” like him from helping those unable to afford haircuts.

Those getting their hair cut outside a licensed salon by an unlicensed person run a real risk, according to Donna Aune, the board’s executive director, adding that state law prohibits a person from practicing cosmetology without a license.

It wasn’t too long ago that those who wanted to braid hair legally in South Carolina had to demonstrate 300 hours of training. If one decided to use hair extensions as part of said braiding, regulations required a full cosmetologist curriculum, some 1,500 hours of class.

I’ve seen youngsters learn to braid hair in 15 minutes. What possible reason could there be to have required 300 hours of training, or to force someone who wants to apply extensions to take a 1,500-hour cosmetologist curriculum except to winnow out competition?

There is a growing body of evidence suggesting that the costs of occupational licenses outweigh the benefits. For hair braiding, as for many other occupations, licensing appears to do little more than prevent some people from earning an honest living in the occupation of their choice.

In 2012, Mississippi, which requires zero hours of training, had more than 1,200 registered braiders. Neighboring Louisiana, which requires 500 hours, had only 32 licensed braiders – despite its larger black population, according to the Institute for Justice.

Reason.com had some pithy comments regarding the potential risks involved with having an unlicensed individual cut the hair of the homeless in Tucson:

“The risk of getting a bad haircut is certainly chilling. But these were free haircuts. Free haircuts given to people who were in no position to pay for one. I’m sure they were aware of the risk they were taking by letting the unlicensed Montesdeoca cut their hair outside of a licensed salon environment, but they were probably okay with that level of risk considering they were homeless and were getting haircuts for free,” according to the magazine.

A problem many homeless have when it comes to job hunting is presenting well when it comes time for an interview. A decent haircut can go a long way toward boosting self-esteem and making a good first impression.

But the Arizona State Board of Cosmetology, whose members likely weren’t serving these individuals in the first place, is more interested in making sure absolutely no one infringes on their monopoly.

(Top: You could give this homeless man in Tucson food, money and a job, but not a free haircut – unless you’re a licensed cosmetologist – thanks to the heavy hand of the Arizona Board of Cosmetology.) 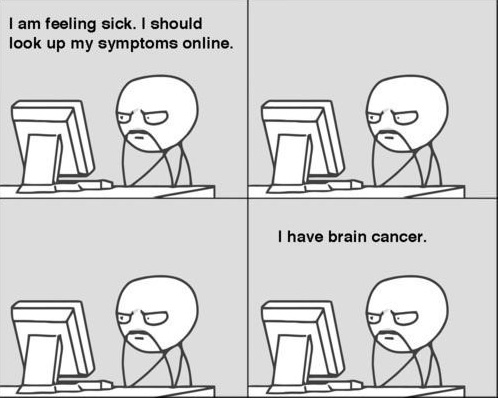 Thanks in part to spending a full hour walking the rows of Longterm Lot No. 2 at the Charlotte International Airport searching for my car at 1 am, I recently found myself under the weather. As in, sick enough to miss work, which happens about once every five years.

After several days of feeling generally awful, and having little else to do, I decided to enter my symptoms into a certain Internet site, just to make sure I didn’t have something other than the common cold. Schistosomiasis is said to be on the uptick in these regions, or so rumor has it.

Fortunately, I’m not the easily excited type as the exercise proved, yet again, the utter absurdity of how knowledge is used on the World Wide Web.

I went to a very well-known site – which I will simply call WebQuack – and entered my symptoms, none of which were unusual: Headache, hoarse voice, nasal congestion, nighttime wheezing, post-nasal drip, runny nose and sore throat.

Be forewarned: this is not an exercise for those who might lean toward hypochondria.

After I entered the relatively straightforward symptoms, I was given 97 possible diagnoses. Only a very few seemed probable, such as sinusitis, nasal congestion, hay fever and the common cold.

Some were almost comical: caffeine withdrawal, excessive caffeine use, foreign object in nose, malocclusion (bite out of alignment), botox injection and constipation.

Then there was the handful of potential afflictions that seem utterly improbable: plague, radiation sickness, cyanide poisoning and ricin poisoning.

Plague? I generally keep my distance from flea-infested rodents, particularly in large Third World cities where the Black Death is still a problem.

Radiation sickness? I haven’t been to the Chernobyl or Fukushima nuclear power plants, and stay clear of spent nuclear fuel whenever possible.

Cyanide? I think I’d have a few more symptoms that those I listed, such as seizures, profuse vomiting and cardiac arrest.

Ricin?!? That’s what Soviet-bloc agents used to do away with enemies of the state. Unless I, in my misspent youth, angered a Stasi agent with a long memory but incredibly poor tracking skills who’s just getting around to evening the score, this seems quite unlikely. That, and the fact I’d be dead before I could have typed my symptoms in WebQuack.

So, what’s the point of this aspect of WebQuack? One supposes it’s to get people to go see doctors, ask for products advertised on WebQuack’s website and drive revenues to said advertisers. As for being helpful, it seems anything but. 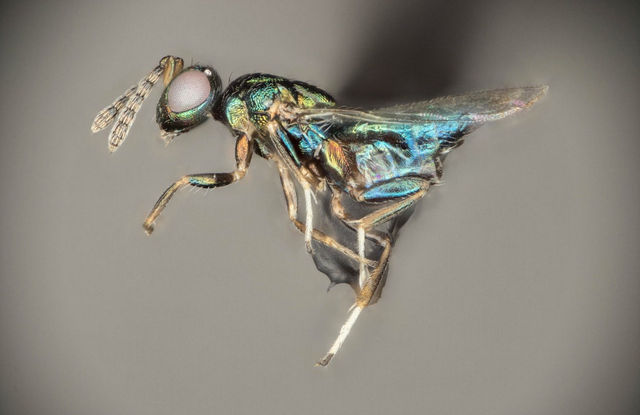 There isn’t much in the wild that I haven’t tangled with, including arachnids and insects. Black widows, hornets, millipedes, cockroaches and scorpions are all fair game, though the more ornery the critter, the more circumspect I am.

Scientists have recently found a new bug, however, that sounds absolutely appalling.

Nicknamed the crypt-keeper wasp, it has a decidedly distasteful life cycle, according to online publication Red Orbit.

How distasteful? Researchers named it after Set, the Egyptian god of evil and violence. That will buy you some street cred among fellow creepy-crawlies, one imagines.

The adult wasp, shown above, lays its egg within the small, wooden compartments built by a different species, the gall wasp, inside live sand oak trees.

If that weren’t grim enough, crypt-keeper wasp larva then causes its host to punch out a hole not quite big enough for it to escape from the tree.

“After the bigger wasp is stuck in the hole it’s burrowed, the crypt-keeper eats its host from within, finally erupting from the host’s head and out into the world,” according to Red Orbit.

I haven’t seen any of these, but I think I’ll do my best to keep my distance from this member of the order Hymenoptera should I happen across any in the future.