Among science’s more amazing advances is its ability to identify the long dead.

On Monday, the Defense POW/MIA Accounting Agency said in a statement that the remains of Navy Fireman 3rd Class Willard Lawson, killed when the USS Oklahoma was sunk by Japanese torpedoes on Dec. 7, 1941, had been identified.

Lawson will be buried April 27 in Madison, Ind., according to the Defense Department.

Last week the Defense Department announced that military officials had identified the remains of 37-year-old Seaman 1st Class Hale McKissack of Talpa, Texas, and 26-year-old Ensign Charles M. Stern Jr. of Albany, N.Y., both of whom were also Oklahoma crew members. McKissack is scheduled to be buried May 4, in nearby Winters, Texas, while Stern will be buried outside Albany sometime this summer.

Seventy-eight years after the Oklahoma was capsized in Pearl Harbor (aftermath shown in image above), taking the lives of 415 sailors and 15 Marines, identification of its dead is proceeding at relatively dizzying pace.

In the immediate aftermath of the attack through 2003 only 35 of the 429 members of the Oklahoma’s crew who died on Dec. 7 were known. But since 2015 more than 200 Oklahoma crew members have been identified, thanks to technology and a push by officials to account for as many members of the ship’s crew as possible. 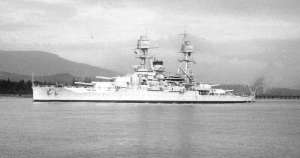 The Oklahoma’s story isn’t as well known as that of the USS Arizona, which remains at the bottom of Pearl Harbor, where hundreds of its crew were entombed following its destruction on Dec. 7. The site is marked by the famed USS Arizona Memorial.

The Oklahoma was among the first ships to be hit by Japanese torpedo bombers, which quickly struck the Nevada-class battleship with three torpedoes in the opening moments of the attack. As the Oklahoma began to capsize, she was struck by two more torpedoes and within 12 minutes had rolled over.

Following the disaster of Dec. 7, 1941, the Oklahoma lay capsized in Pearl Harbor for 18 months before being righted. Remains of Oklahoma crew continued to be collected through June 1944, with the Navy interring the dead in the Halawa and Nu’uanu cemeteries in Hawaii.

The remains were disinterred by the American Graves Registration Service from the two cemeteries in September 1947, and transferred to the Central Identification Laboratory at Schofield Barracks in Hawaii. Fewer than 10 percent of the dead had been identified.

The 394 unknowns were buried in plots at the National Memorial Cemetery of the Pacific, known as the Punchbowl, in Honolulu.

In 2015, as part of the USS Oklahoma Project, the Defense POW/MIA Accounting Agency, through a partnership with the Department of Veterans Affairs, exhumed all of the unknown remains from the Oklahoma, and began the lengthy identification process.

“It is remarkable for us to reach the 200th identification,” said Sean Patterson, Armed Forces Medical Examiner System’s DNA Operations Quality Management Section DNA Analyst. “We’ve identified so many people in a short amount of time using new technology such as the next-generation sequencing as well as with conventional technology.”

Since the start of 2019, the Defense POW/MIA Accounting Agency has announced the identities of 35 American service personnel, dead from World War II, the Korean War and the Vietnam War. These include 15 from the USS Oklahoma and one from the USS West Virginia, also sunk on Dec. 7 at Pearl Harbor.

In addition, there are likely others that have been identified since the start of the year, but next of kin have not been located as yet.

(Top: USS Oklahoma, capsized in the Pearl Harbor, following the Dec. 7, 1941, attack by Japan. Men can be seen atop the ship’s hull and one of her propellers, or screws, can be seen in the foreground. The USS Maryland is next to the Oklahoma.)

One thought on “Technology helps US identify Pearl Harbor dead”