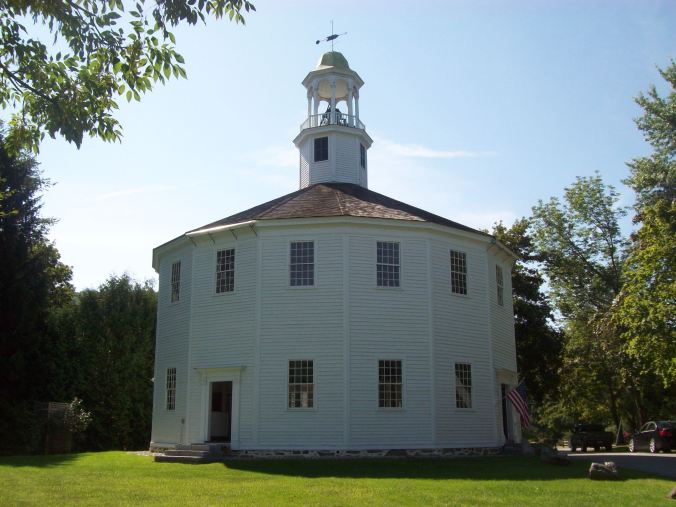 The Old Round Church of Richmond, Vt., is unusual for a number of reasons:

The Old Round Church was constructed in 1812-13 by William Rhodes. Rhodes was a native of Claremont, NH, which was home to a 16-sided brick church, similar to what would be erected in Richmond, located in the western foothills of Vermont’s Green Mountains on the banks of the Winooski River.

Rhodes was no novice craftsman: He built several covered bridges in New England, a number of houses, and was also a blacksmith.

Construction was funded by sale of pews, most of which were purchased by Congregationalists. The other denominations which used the church in its early decades were Baptists, Methodist, Universalists and a group described as “Christians.”

The structure was built in the Federal style. Rhodes was able to give the structure an appearance of light, delicate walls by hiding the 16 large corner posts behind 32 interior sides, making the inside seem much more round than the outside.

The building is topped by a sixteen-sided roof with a two-stage octagonal bell tower.

Because of the unusual design, much of the flooring, which was fitted around pew boxes, is hand cut, with some of the planks up to 24 inches wide and many cut at 45 or 60 degree angles, to enable them to fit with adjacent planks.

END_OF_DOCUMENT_TOKEN_TO_BE_REPLACED

Amid the many monuments and memorials found on the Washington Mall, one structure stands out for a very different reason. The Lock Keeper’s House of the long-defunct Chesapeake and Ohio Canal is a 180-year old structure that sits at the intersection of Constitution Avenue and 17th Street NW, approximately 1,000 feet north of the National World War II Memorial and less than 1,500 feet northeast of the Washington Monument.

Originally the eastern terminal of the Chesapeake and Ohio Canal, the structure was erected around 1835, part of an extension of the C&O Canal. The building was constructed as the house for the canal lock keeper, who collected tolls and kept records of commerce on the waterway.

Plans are underway to restore and relocate the venerable structure, part of a $7.5 million refurbishment that will take approximately two years to complete, according to an upcoming edition of American Heritage magazine.

The two-story stone block structure will be moved back from the busy intersection as part of the restoration.

The effort is being bolstered by a $1 million donation from the American Express Foundation, which will assist  National Park Service and Trust for the National Mall plans to renovate the house. The venerable structure will be used as a gateway to the revitalized 38-acre Constitution Gardens and nearby monuments.

The C&O Canal began as George Washington’s idea to open the Potomac River as an all-water transportation route to the Ohio River Valley, according to the C&O Canal Trust.

Within the nation’s capital, the canal passed along the present line of B Street in front of house, emptying into Tiber Creek and the Potomac River.