When the 115th Congress is sworn into office next month, it will include 21 women senators, a record, and there will be three states where both senators are women.

Of the 46 women to have served in the US Senate since its inception, fully half have taken office during the past 20 years.

But one doesn’t hear a whole lot about the Rebecca Ann Latimer Felton, the first woman to serve in the US Senate. It may partly be because she served just a single day, but it’s also likely that she’s little recognized because she espoused views that today are decidedly out of tune with society as a whole.

Felton was born in 1835 in Decatur, Ga., the daughter of a prosperous planter and merchant. Unusual in the antebellum South, she was sent to Madison Female College, in Madison, Ga., which was essentially a finishing school, incorporating both the last years of secondary education and the first year or two of college. At Madison, she finished at the top of her class.

She married young, in 1853, to William H. Felton, and moved to the latter’s plantation just north of Cartersville, Ga. Like most plantations in the Deep South, the Feltons had slaves.

On the plus side, Rebecca Ann Felton was a prominent women’s rights advocate, pushing for women’s suffrage long before it was popular. In addition, she was a proponent of prison reform and educational modernization.

Also a lecturer, writer and reformer, Felton was considered the most prominent woman in Georgia in the Progressive Era.

In 1922, when Felton was 87, she was named to the US Senate through a bit a political maneuvering, though not all on her part.

Georgia Gov. Thomas W. Hardwick was a candidate for the next general election to the Senate when sitting Sen. Thomas E. Watson died prematurely. Seeking an appointee who would not be a competitor in the coming special election to fill the vacant seat and also looking for a way to secure the vote of the new women voters alienated by his earlier opposition to the Nineteenth Amendment (giving women the right to vote), Hardwick chose Felton to serve as senator in early October 1922.

Despite Hardwick’s tactics, Walter F. George won the seat. Rather than take his seat immediately when the Senate reconvened on Nov. 21, 1922, George allowed Felton to be sworn in. This was due in part to the efforts of Felton and a supportive campaign launched by the women of Georgia.

While Felton was a solon for but a single day, she became the first woman seated in the US Senate.

As such, she was oldest freshman senator to enter the legislative body, at 87 years, nine months and 22 days; was the last member of either house of Congress to have been a slave owner; and is also the only woman to have served as a senator from Georgia.

Unfortunately, Felton’s “progressivism” only went so far. Felton was, quite simply, a virulent white supremacist. She claimed, for instance, that the more money that Georgia spent on black education, the more crimes blacks committed, wrote Leon Litwack in the 1999 work Trouble in Mind: Black Southerners in the Age of Jim Crow.

Felton considered “young blacks” who sought equal treatment “half-civilized gorillas,” and ascribed to them a “brutal lust” for white women, Litwack wrote, adding that while Felton sought suffrage for women, she decried voting rights for blacks, arguing that it led directly to the rape of white women.

Felton was among the few prominent women who spoke in favor of lynching and on at least one occasion stated that white Southerners should “lynch a thousand [black men] a week if it becomes necessary” to “protect woman’s dearest possession.”

“She’s a puzzle to us now because we would have expected a woman who was committed to expanding the opportunity for women to have been sensitive to the plight and oppression of African Americans,” Fitz Brundage, an expert on post-Civil War Southern history at the University of North Carolina, told The Wall Street Journal. “She never had a moment of introspection.”

(Top: Rebecca Ann Latimer Felton, in all her conflicted opaqueness.)

A 155-year-old structure located in rural South Carolina embodies the conflicted racial legacy evident in South Carolina and possibly other parts of the South, if not the nation.

The Jacob Bedenbaugh House, built around 1860, isn’t noteworthy for its age or its architectural style. Described as a detached two-story traditional “I” house with a modified L-shaped plan, the dwelling, in serious need of restoration, is located along a country highway about five miles east of Prosperity, SC.

What prompted the US Department of the Interior to the place the home on the National Register of Historic Places is the individuals who lived in the structure during its first 55-75 years.

Jacob Belton Bedenbaugh was a white South Carolinian born in 1833. His common-law wife Sarah Bedenbaugh, described as mulatto, was initially a slave purchased by Jacob. Sometime between 1860 and 1864, the two entered into a relationship.

Despite the increasing difficulties inherent with pursuing an interracial relationship in the Deep South in the years following the Civil War – not that it was a walk in the park during or before – the Bedenbaughs remained together in the house as a couple from at least 1864 until Jacob’s death in 1915 and had eight children.

But going against prevailing social mores didn’t come without a price. In July 1890, they were indicted and tried for “fornication” due to the fact that they living together. Being an interracial couple undoubtedly contributed to the decision to prosecute.

It’s unclear from a search of the Internet what the outcome of the case was, but one should bear in mind that South Carolina’s political climate was changing rapidly in 1890 as the Conservatives who had come to power in 1877 following the end of Reconstruction were about to be turned out of office by populist Ben Tillman, who was elected later that year, and his supporters.

Tillman, a virulent racist, was a leading force behind the state’s 1895 constitution, which solidified Jim Crowism in the state and, among other things, prohibited interracial marriage.

Legally, the couple could have married during the war, Reconstruction and immediate-post Reconstruction period, provided they had been able to find a minister willing to perform the service, but the Tillman Constitution forever barred Jacob and Sarah Bedenbaugh from being wedded.

END_OF_DOCUMENT_TOKEN_TO_BE_REPLACED

One hundred years ago this month, Lt. Gov. Charles A. Smith began the shortest reign in South Carolina gubernatorial history, a five-day stretch as the Palmetto State’s chief executive that ran from Jan. 14-19, 1915.

Smith’s brief tenure as governor came about as the result of the actions of one of the more reprehensible South Carolinians to hold office in the state’s nearly 350-year history: Coleman Livingston “Cole” Blease.

Blease, a self-proclaimed pro-lynching, anti-black education politician cut from the same cloth as Pitchfork Ben Tillman, earned election to the state’s highest office through his ability “to play on race, religion and class prejudices,” appealing especially to South Carolina’s farmers and mill workers, according to Ernest Lander’s work, “A History of South Carolina 1865-1960.”

The state was anything but a hotbed of progressivism in the early 20th century, but Blease acquired such a bad reputation that he was said to represent the worst aspects of Jim Crow and Ben Tillman. For example, Blease is said to have once buried the severed finger of a lynched black man in the South Carolina gubernatorial garden in Columbia.

In their book “Columbia: History of a Southern Capital,” Lynn Salsi and Margaret Sims identified some of Blease’s more “endearing” legacies:

Despite the need for reform, he fought regulation of safety, public health and education. He also pardoned a record number of criminals, some say more than 1,500. His vetoes included hand-written messages using profane language, the wrote.

Worse yet was his treatment of blacks.

In his 1911 inauguration address, Blease stated, “I am opposed to white people’s taxes being used to educate negroes.” He later added that he was opposed to white convicts being placed in the same labor camps as black convicts, adding that he believed that “a governor would be justified in granting a pardon to a white man who is thus treated, …”

In the same address, he urged the re-institution of public executions, particularly those of blacks.

END_OF_DOCUMENT_TOKEN_TO_BE_REPLACED

For more than a century, Tillman Hall has dominated Winthrop University’s campus.

The three-story building, constructed in the Richardsonian Romanesque style, features a combination gabled and hipped roof configuration, projecting bay windows, and is highlighted by a clock tower with an open belfry.

The red-brick edifice was erected in 1894, during South Carolina Gov. Ben Tillman’s reign, and the structure was named for the Palmetto State politician, who would go on to serve in the US Senate, in 1962. Tillman was instrumental in the founding of both Winthrop and Clemson University.

Unfortunately for Winthrop, Tillman’s legacy hasn’t held up well under the scrutiny of history.

A virulent racist who worked not only to codify Jim Crow laws in South Carolina, Tillman personally advocated the lynching of blacks.

So perhaps it’s not unreasonable that a pair of former Winthrop students would like the Rock Hill-based school to consider changing the name of the structure.

However, Winthrop University officials have replied that state law prevents such action.

South Carolina law prohibits changing the name of buildings or monuments named for historic figures, Winthrop Board of Trustees Chairwoman Kathy Bigham wrote to former students Michael Fortune and Richard Davis in a letter this week.

In the letter, Bigham cites a South Carolina law that was passed in 2000 to protect war memorials and historic structures on public property. The law prevents anyone from changing the name of any street, bridge, structure or park that has been “dedicated in memory of, or named for, any historic figure or historic event,” according to the Rock Hill Herald.

Changing the state law requires a two-thirds vote of the General Assembly, the publication added.

Given that it’s difficult to get two-thirds of SC lawmakers to agree on what day of the week it is, it’s unlikely that anyone could gather enough support to rename Tillman Hall.

However, that doesn’t mean that Winthrop can’t use the building’s name as a chance to highlight Pitchfork Ben Tillman’s backwardism or how much damage his views have done to South Carolina over the decades.

END_OF_DOCUMENT_TOKEN_TO_BE_REPLACED 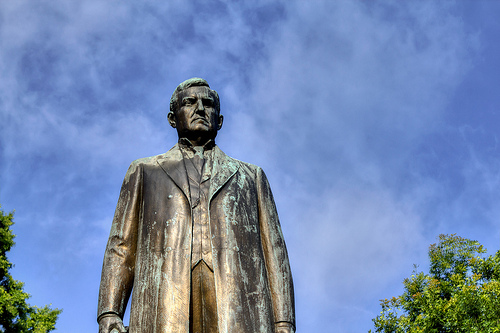 Earlier this month a Charleston writer took out a full-page advertisement in The State, the daily newspaper of Columbia, SC, calling for the removal of a statue of former governor and US senator Ben Tillman from the South Carolina Statehouse grounds.

Will Moredock has long advocated for the removal of the imposing statue of Tillman, an unabashed racist who perhaps more than anyone else in South Carolina came to embody the evils of post-Reconstruction racism.

Pitchfork Ben Tillman never hid his hatred for blacks or his efforts to maintain white supremacy.

“We have done our level best [to prevent blacks from voting] … we have scratched our heads to find out how we could eliminate the last one of them,” he said in 1900. “We stuffed ballot boxes. We shot them. We are not ashamed of it.”

Tillman’s populist rabble-rousing and first class demagoguery got him elected governor in 1890, turning out the conservative Bourbons, and he was re-elected two years later.

In 1894, he was appointed to the US Senate, where he served until his death in 1918, and he never missed a chance to voice his narrow-minded sentiments.

Tillman is said to have pioneered the use of race to mobilize white voters, and historian James M. McPherson has claimed that Tillman “created the model for two generations of Southern ‘demagogues.’”