Claims to amazing longevity are not only legion, they go back thousands of years. Methuselah is noted in the bible for having lived 969 years; Jimmu, alleged to be the first emperor of Japan, was said to have survived more than 125 years; and the Soviet Union claimed that as of 1960 it had 100 citizens between the ages of 120 and 156.

So it was some skepticism that I read the wording on the tombstone of Laurence Dunphey, located in Savannah’s Catholic Cemetery:

to the Memory of

A Native of Clonmel

who departed this life

Were the information on Dunphey’s gravestone correct, it would mean he had been born in 1689, the year before the Battle of the Boyne, fought between English King James II and the Dutch Prince William of Orange. William and his wife Mary had overthrown James in 1688.

The battle, fought near the town of Drogheda on the east coast of Ireland, about 100 miles from Clonmel, resulted in a victory for William, curtailed James’s bid to retaken the English throne and aided in ensuring the continued Protestant ascendancy in Ireland. It is still a point of pride today with Protestants in Northern Ireland, the more low brow of whom use it as occasion to attempt to whip up anti-Catholic feeling. 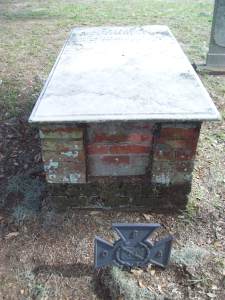 Box vault of Laurence Dunphey in Catholic Cemetery, Savannah, Ga. Note Southern Cross of Honor in front of grave, apparently depicting belief that Dunphey, who died in 1834 at the purported age of 145, also managed to fight in the US Civil War (1861-65).

Georgia itself wasn’t established as a British colony until 1733, when Dunphey would purportedly have been 44 years old.

Of course, it’s almost a certainty that Dunphey was not 145 when he died in 1834. It’s possible Dunphey was old, even very old when he died, but it’s more likely that a mistake was made by someone somewhere along the line.

While some Irish immigrants had moved into Georgia from South Carolina in the 18th century and there were Irish who came with founder James Oglethorpe when he arrived in Savannah in 1733, the first wave of Irish immigration directly into Savannah came in the 1830s, with the arrival of individuals to help build the Central Rail Road and Canal Co., later the Central of Georgia Railway.

Had Dunphey immigrated with the very earliest settlers to Georgia, he probably would have been recognized as such as his death; it seems implausible that he chose to leave his homeland and come over with the first major wave of Irish immigrants at the age of 140-plus.

A writer for the Catholic Diocese of Savannah speculated that Dunphey’s age was probably inscribed on his gravestone by “bored Union soldiers” during or just after the War Between the States.

However, the lettering appears identical across the marker, meaning that unless the Federal soldier-turned-mischievous stonemason opted to remake an entire marble slab, it’s almost certain that the grave marker was made shortly after Dunphey’s death.

Whatever the real story behind the age of Laurence Dunphey – County Tipperary native, US immigrant and long-dead Irish Catholic – he’s managed to achieve a small bit of immortality, no matter how long he really lived.