Who comes up with this foolishness?

If the planet can’t handle my “manliness,” then good ol’ Earth better pull on its big-girl panties and get its act together, although one suspects Mother Earth’s not the one with the fragile constitution.

The Washington Post story posits that women are more “eco-friendly” than men. “They generally use less fuel and energy. They eat less meat. They’re more concerned about climate change,” the article reports.

“Stereotypical feminine behavior and attitudes are more in parallel with taking care of the environment,” James Wilkie, a business professor at the University of Notre Dame. “Male traits tend to conflict with this idea of maintaining a nice environment for other people.”

That’s odd because hunters and anglers, who are predominantly men, play major roles in conservation, if for no other reason than it doesn’t bode well for the future of either activity if the species you’re after has been exterminated.

In reality it’s many modern journalists and other cultural elites who can’t handle manliness. Few things are more embarrassing than watching a grown man shriek at the sight of a six-inch long snake or demonstrate his inability to even begin to set up a simple tent.

No wonder so many encase themselves in urban jungles devoid of wildlife and wilderness.

Of course, that’s how we in large areas of the West have ended up with sizeable segments of society that curl into defenseless balls when even small calamities strike, are repulsed by the mere idea of an animal being killed yet traipse regularly to the supermarket for hamburger and steak, and are afraid to so much as look at a gun crosswise for fear it will, of its own volition, go on a murderous rampage.

Methinks it’s not manliness that’s at risk for hurting the planet, but the planet itself, by its nature an often unforgiving place, that scares those with a low threshold for masculinity.

After several months work and an expenditure of $15,000, South Carolina’s oldest state document – dating back nearly 350 years – is back in the state archives.

A deed for a lot of land at Charleston’s original location at Albemarle Point dates to May 28, 1671, the year after English settlers landed at what is now the Charles Towne Landing State Historic Site, and is included in Records of the Secretary of the Province 1671-1673.

Those records and a companion volume, Records of the Registrar of the Province 1673-1675, feature 26 handwritten sheets recently conserved at the Northeast Document Conservation Center in Andover, Mass.

Among the documents is an accounting of property owned by two men from Barbados forming a partnership to create a plantation, according to the Associated Press. It lists items ranging from the value of their tools to the names of indentured servants.

Charleston was established in 1670 by English colonists from Bermuda, under the first governor of South Carolina, William Sayle, on the west bank of the Ashley River a few miles northwest of the present city. It was moved to its current location on the Charleston peninsula a decade later.

“I think it’s a tribute to all those people who came before who recognized the significance of all these public records and recognized the need to take care of them,” SC Department of Archives and History Director Eric Emerson said. “This is the first record. It’s really kind of the genesis of record-keeping in South Carolina and the genesis of the archives.”

Decades ago, the 1671 deed didn’t appear destined to be around much longer.

It was described in 1944 as “a battered document having fallen victim to ‘storms, earthquakes and wars,’ making it a difficult document to read or preserve,” according to Archives and History spokesman Geoffrey Hardee.

Seventy years ago it and its companion documents, which for many years had been kept in the heat and humidity of the Statehouse basement, were sent to Virginia to be preserved using what was then cutting edge technology – lamination with a sheet of acetate.

Since then, conservators have determined such treatment did more harm than good as the acetate deteriorated over time.

In Massachusetts, the laminate was removed with acetone, ethanol and water, the acid was removed from the paper and then the paper was lined on both sides with a special transparent tissue paper.

“A staff member accompanied it up there and a staff member brought it back,” said Charles Lesser, a retired department archivist and an expert on early colonial documents, who noted that the state wasn’t taking any chances with its records.

“This is the oldest government record that has survived here,” he said. “This has been in state custody from 1671 until the present.”

The department keeps state government records in temperature- and humidity-controlled vaults at its headquarters just outside Columbia.

It has an estimated 80 million documents, including such items as the state’s copy of the Bill of Rights ratified by state lawmakers in 1790 and the Ordinance of Secession passed when South Carolina seceded from the Union in 1860.

The Records of the Secretary are the first documents of what would later become the South Carolina state government, according to the Associated Press.

In those days, such things as recording deeds and wills were the responsibility of the state, Lesser said. Later those functions passed to South Carolina’s counties, according to the wire service.

(Top: South Carolina’s earliest state government document, a 1671 deed for a lot at Charles Towne Landing, is seen at the SC Department of Archives and History in Columbia, on March 27, 2015. Photo credit: The Associated Press.)

If you’ve ever had occasion to see a giant ray gliding gracefully through the water, you understand what stunning creatures they are.

Prehistoric in appearance, stingrays and other rays possess an elegance of movement that is rare on land or sea.

The stingray weighed as much as 800 pounds and was caught on rod and reel, according to Corwin, host of Ocean Mysteries.

The catch may set a new world’s record for the largest freshwater fish ever caught. The current record holder is a Mekong giant catfish, according to Guinness World Records.

“It was an incredible moment of adventure and science,” Corwin told USA TODAY Network. “Multiple people were on the rod and reel trying to pull this monster in,” he said, adding that it took two hours to secure the fish.

The stingray, which was pregnant, was released after capture.

Corwin was on location filming an upcoming episode of Ocean Mysteries along with Nantarika Chansue, an expert on stingrays who has been studying them in the region.

An embedded microchip in the stingray revealed that Chansue had caught the same animal six years prior, according to Corwin.

The state of South Carolina is seeking funding in order to conserve its oldest book.

Titled Records of the Secretary of the Province and the Register of the Province of South Carolina: 1671-1675, the work contains records dating from just after the founding of the colony by English settlers in 1670.

The earliest record listed is a property deed recorded only months after the first settlers landed at Albemarle Point on the Ashley River, according to the SC Department of Archives and History.

The book is in serious need of restoration and the South Carolina Archives and History Foundation is in the process of raising money for the effort.

“Last conserved in 1944, the record book’s pages are now acidic, dirty, and falling out of their binding,” according to the department.

South Carolina’s concern for preserving its government records dates back to the very beginning of the colony.

“Joseph Dalton, the first secretary of the province, worked hard to get ‘an orderly method’ to record keeping in the fledgling settlement,” according to a 1995 work South Carolina Begins: The Records of a Proprietary Colony, 1663-1721. 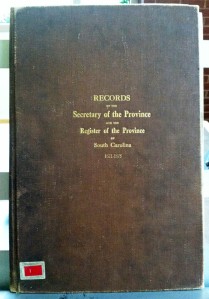 Records of the Secretary of the Province contains key documents from the colony’s founding, “including evidence of early support for the colony by Barbadians; wills by Governor William Sayle and Henry Woodward as he was preparing to explore the ‘hazardous and dangerous’ wilderness; and two complete inventories, including the names and terms of indentured servants, for a plantation established as a partnership,” according to the Department of Archives and History.

The goal is to send the record book to the Northeast Document Conservation Center, regarded as one of the best conservation facilities in the country.

There the 54-page volume will be conserved and housed in a period binding and a specially constructed case. In addition Archives and History staff will create digital images of the restored volume to make its information more widely available.

To protect the 10 historic siege and garrison guns still located at the Sullivans Island fortification, preservationists have turned to technology, including computer sensors, in a bid to defend them from the salt and humidity omnipresent along the South Carolina coast.

The guns of Fort Moultrie are of particular historical significance because they were among the weapons that were used to fire on Fort Sumter April 12-13, 1861, officially beginning the War Between the States.

“The last of the guns, a 7-ton Union rifled Parrott gun suspended in a yellow sling held by a crane, was slowly jockeyed into place onto a new concrete base last week,” according to The Associated Press. “It completes what the fort refers to as Cannon Row, where seven of the heavy guns are lined up next to each other.”

The conservation work, which included coating nearly all the guns in rust-retarding epoxy, is being done through a collaborative effort between the National Park Service and Clemson University’s Restoration Institute.

The price tag for the multi-year conservation effort is $900,000.

END_OF_DOCUMENT_TOKEN_TO_BE_REPLACED

It appears Britain’s only native species of crawfish is tad more snobbish than its American cousin, and it’s proving a definite hindrance to its survival.

American signal crawfish are not only less fussy about what they eat than Britain’s white-clawed crawfish but it’s also are more resistant to parasites.

Researchers from the University of Leeds in England have published a study in the online journal PLoS One that looks at why signal crawfish – or “crayfish,” as non-Southerners like to refer to the crustacean – have been gaining the upper hand over white-clawed crawfish in Great Britain since the former’s introduction from the US in the 1970s.

Among other things, the study compares how the two species deal with food.

“The American signal crayfish ate up to 83 per cent more food per day than did their native cousins,” according to Underwatertimes.com.

“The research also showed that white-clawed crayfish are much more choosy about what they eat, preferring particular types of prey, while the signals eat equal amounts of all prey,” it added.