There’s much ado about former New York Times Executive Editor Jill Abramson’s new book and whether she takes her former employer to task for its coverage of the Trump Administration.

“Abramson, the veteran journalist who led the newspaper from 2011 to 2014, says the Times has a financial incentive to bash the president and that the imbalance is helping to erode its credibility,” wrote Fox media critic Howard Kurtz about Abramson’s book.

Abramson, who led the paper from 2011 to 2014, claims Kurtz took her words out of context, and said rather that her book is full of praise for the Times and Washington Post and their coverage of Trump.

No matter what the case, there are substantial numbers of U.S. citizens who, whether correct or not, believe the Times and Post have become “the opposition” to the Trump Administration.

What many news consumers don’t realize is that 125 years ago, newspapers were often unabashedly biased in their political coverage. The difference being that there were so many newspapers – more than a dozen in New York City alone – that the republic could afford to have media predisposed to one party or another. 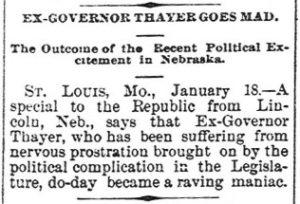 Consider this small blurb which ran in papers across much of the country in January 1891: Under the headline “Ex-Governor Thayer Goes Mad” it was reported from Lincoln, Neb., on April 18, 1891, that “Ex-Governor Thayer, who has been suffering from nervous prostration brought on by the political complication in the Legislature, today became a raving maniac.”

John Milton Thayer was a Republican who had served as a Union general in the War Between the States, seeing action as such noted locales as Shiloh, Vicksburg and Fort Donelson.

He was one of the first two senators from Nebraska after it gained statehood, was appointed territorial governor of Wyoming by Ulysses Grant and was elected to two terms as governor of Nebraska, in 1886 and 1888.

Thayer didn’t run in the 1890 election, which was won by Democrat James Boyd, a native of County Tyrone, Ireland. Boyd was sworn in on January 8, 1891. However, the Farmers Alliance Party candidate, John Powers, who had finished second by 1,144 votes, contested the results, initially citing voting irregularities.

A month after the election, newspapers began reporting that Governor-elect Boyd wasn’t a U.S. citizen because his father, upon arriving in the United States in the 1840s, had failed to follow through on obtaining citizenship, and didn’t actually do so until the month his son was elected, more than 30 years after the family arrived from the Emerald Isle.

John Milton Thayer, governor of Nebraska, territorial governor of Wyoming and one of the two first senators from Nebraska.

Under naturalization laws in place at that time, “if a parent failed to naturalize before the child reached the age of majority, the child could only acquire citizenship through their own naturalization proceeding,” according to Nebraska Law Review.

Thayer also questioned Boyd’s citizenship and refused to relinquish the governor’s quarters. Within a few days, the Nebraska Supreme Court suggested that Thayer hand over the governor’s office while it considered the case.

It was during this period that Thayer was said to have become a “raving maniac,” with the story running from coast to coast in papers big and small, including the Boston Globe, San Francisco Call and Virginia’s Alexandria Gazette.

The Nebraska Supreme Court ruled in May 1891 that Boyd was not a citizen and, therefore, ineligible for election as governor. With this decision, Thayer was reinstalled as governor.

Boyd then appealed the case to the U.S. Supreme Court, where he based his claim for citizenship on three points:

The Supreme Court agreed Boyd was a citizen, and he took office in February 1892.

Thayer retired from politics after his abbreviated third term and lived until 1906.

Despite being referred to as a raving maniac in papers across the country, there is no mention of Thayer’s purported lunacy in the Encyclopedia of Nebraska or the National Governors Association’s biography of Thayer.

A few days after the first article appeared, the Omaha Daily Bee ran a short piece stating that “General Thayer is not a raving maniac, as has been asserted,” but was simply resting in bed after having overtaxed himself.

One imagines General Thayer being somewhat less than thrilled to see his name again linked with the term “raving maniac,” even if in a correction of sorts.

More than likely, many of the publications that printed the initial article were Democratic organs which were only too happy to connect a Republican politician to madness. Were the tables turned, Republican publications no doubt would have done the same thing to a Democrat.

This was during a period when newspapers were much more open about their political allegiances, and the public understood where publications stood on candidates and key issues.

Rest assured that Thayer wasn’t the only politician in the 19th century to be incorrectly labeled as a raving maniac.