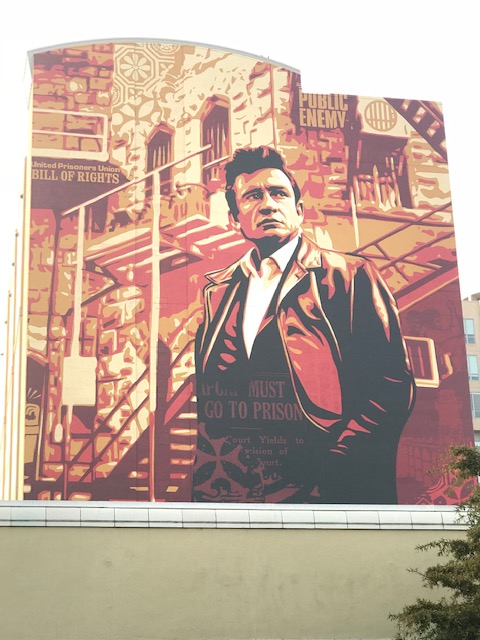 Near the California state capital in downtown Sacramento is a striking 15-story mural of music legend Johnny Cash.

The mural was completed earlier this year by graphic artist Shepard Fairey, who is best known for the “Hope” poster supporting Barack Obama’s 2008 presidential campaign.

It shows Cash looking toward Folsom State Prison, site of one of his most famous performances, and the subject of one of Cash’s greatest songs, Folsom Prison Blues.

The mural is both a tribute to Cash and recognizes his passion for prison reform.

Cash mural in downtown Sacramento, with more of the surrounding area, for context.

Cash staged close to 30 prison concerts over a 20-year period and two albums were based on those performances: “Live at Folsom Prison” and “Live at San Quentin,” according to the Sacramento Bee.

Fairey is also an advocate for prison reform, and did the mural in the hope that it would “ignite a conversation around the need for incarceration reform,” he told the publication.

The mural is based on a print Fairey produced in 2016. It is Fairey’s largest in California and his most “most technically ambitious mural ever.”