When the Rock House was built in 1758 in Newberry County, SC, it sat along the main road that stretched between Charleston and the South Carolina Upstate. Today, it’s nearly a mile from any road, not because the structure has been moved but because roads have shifted.

The Rock House is as simple as its name. A two-over-two rectangular structure, it was built during the French and Indian War with two rooms downstairs and two upstairs.

Today, it’s the oldest structure in the county, even if its age is showing. Parts of the building’s walls are have fallen away, several dozen bricks from one of its two chimneys lay scattered about its interior, the east side of the edifice is covered in vegetation and its insides are filled with hay and flecked with numerous wasps’ nests.

Yet, the dilapidated state also offers the opportunity to glimpse the guts of the dwelling by exposing a side view of the walls, a mixture of fieldstones and mortar a foot thick.

Surrounded by acres and acres of golden wheat swaying gently with the afternoon breeze, the aged structure retains a special mystique, even if it’s been vacant for decades. 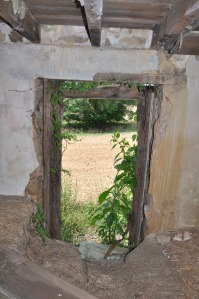 Tradition holds that the house was built as protection against Indians.

During the French and Indian War, many tribes found themselves caught between English colonies along the Eastern US seaboard and French territory that ran from the Gulf of Mexico up into what would become Canada. In the Carolinas, the Cherokee, desperate to retain their traditional lands and fend off encroaching whites, attacked settlers in what was known as the Anglo-Cherokee War (1758-1761).

Settlers all along the Carolina frontier were on guard during the conflict.

A historical marker set on the road a good distance from the structure does little to enlighten visitors as the house’s history.

It says, simply, “On December 7, 1756, the Council of the Colony recorded a petition of Jacob Hoffman for 200 acres of bounty land. He was granted this acreage on Palmetto Branch in 1758. The building on this tract, which has long been known as ‘The Rock House,’ exhibits details of construction which support the local tradition that it was built before the American Revolution.”

Not exactly a glut of information.

The Rock House was built with small windows, along with attic end windows with small holes. The attic windows were built as a position to place guns, according to George Leland Summers’ 1950 work Newberry County, South Carolina: Historical and Genealogical Annals.

The two-over-two style structure was common for frontier homes built during the Colonial and Antebellum eras.

While the home may have been built with safety in mind first and foremost, it wasn’t without amenities. The floors were constructed with thick heart pine wood and its window frames were carved. The dwelling’s joists, roughly three by six inches, were hewn with a broadax, and wooden pegs are evident throughout the house, according to Newberry County, South Carolina: Historical and Genealogical Annals.

It’s difficult to say how much longer the Rock House will last. As long as it’s not hit by the tail end of a hurricane or a tornado, or vegetation isn’t allowed to grow into the walls and break apart mortar and stones, it could easily survive for at least another half century.

Should the roof blow off, vandals take key pieces of stone or something unexpected happen, however, the Rock House could crumble relatively quickly.

No matter what its future, it’s easily outlived the expectations of the individual or individuals who built it nearly 260 years ago.

(Below: View of interior showing damaged chimney and collapsed bricks.)