In our supposedly enlightened age it’s easy to look back at societies of the past and tut-tut the apparent barbarity they not only espoused but seemingly revelled in.

England has long been held out as an example of the legal conundrum that existed in much of the world prior to the 20th century in terms of jurisprudence. By the late 18th century 220 felonies carried the death sentence in English courts, including such seemingly mundane acts as poaching, minor theft and even “being in the company of gypsies for one month.”

The idea was to scare people into behaving, among other things.

However, perhaps there was also a measure of frustration with those who chose to flout the law, at least when it came to legitimate crime.

This may seem a stretch until one reads about incidents such as that which took place in Portugal last week, when a tourist destroyed a 126-year-old statue when he climbed alongside it in an effort to take a selfie. 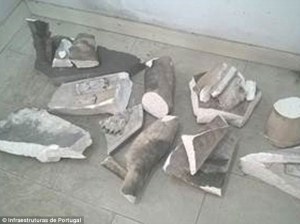 Remnants of broken statue of Dom Sebastiao after tourist tried to take a selfie with it in Lisbon.

The 24-year-old man, who has not been identified, scaled the façade of a Lisbon train station to get next to a famous statue of former Portuguese king Dom Sebastian I in an effort to take his own picture next to the art work.

After reaching the statue, the man knocked the freestanding sculpture off its pedestal. It fell to the ground and was smashed to pieces, according to Fox News.

In fashion befitting a halfwit, the tourist reportedly tried to flee but was apprehended by police.

He will face charges of destruction of public property at a later date.

Sebastian ruled Portugal’s between 1557 and 1578. He became king at the age of 3, although regents ruled until Sebastian reached the age of majority.

Sebastian is a legendary but tragic figure in Portuguese history; the young king embarked on a crusade against Morocco but was killed at the famous Battle of the Three Kings in northern Morocco at the age of 24. His body was never recovered.

The statue in Sebastian’s honor had stood proudly outside Lisbon’s Rossio railway station since 1890 – until last week.

The pinhead who perpetrated the act of stupidity may not deserve the death penalty, but should a Portuguese judge decide to level a heavy sentence, I, for one, won’t lose any sleep. You can’t cure stupid, but you can certainly try to keep it under wraps.

(Top: Statue of Dom Sebastian in Lisbon’s Rossio railway station prior to its loss after a tourist climbed alongside it to take a selfie.)