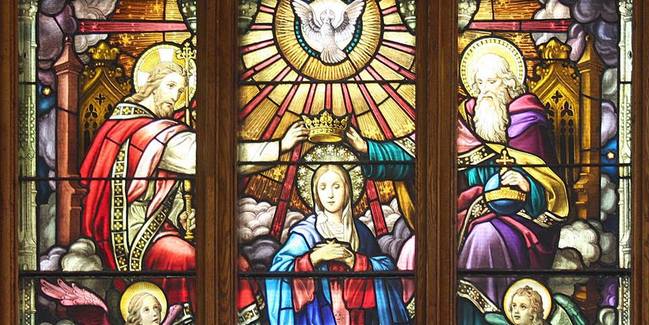 This past weekend a small Roman Catholic parish in Chapin, SC, unveiled its new church, a Modern Gothic Revival-style structure 10 years in the making.

Our Lady of the Lake Church features an impressive bell, a beautiful ambo and a striking altar. But perhaps what sets it apart from most new churches is its stained glass windows.

Unlike most of what is in the new structure, the eight windows are more than a century old, having come from the old Monastery of the Dominican Sisters of the Perpetual Rosary in Union City, NJ, also known as “The Blue Chapel.”

They were made at Buffalo Glass Works in New York by well-known stained glass artist Leo P. Frohe, who created them in the spirit of the Munich School style of glass, common in the late 19th and early 20th centuries.

The set of windows was once called “the poor man’s Bible” by Frohe and his contemporaries because they offered a physical way for worshippers to experience the transcendence of God. 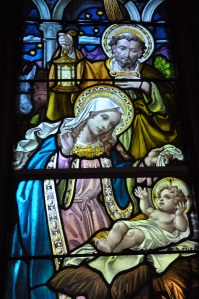 Five of the windows depict the joyful mysteries of the rosary, and the other three show images of the Sacred Heart appearing to St. Gertrude, Jesus’ agony in the Garden of Gethsemane and Mary’s coronation in heaven.

Frohe (1851-1919) was born in The Netherlands. He came to Buffalo in 1862 with his mother and sisters, joining his father, a classically trained artist who had arrived in the US a year earlier.

For many years Frohe was the manager of the Buffalo Stained Glass Works. Frohe’s work for the company won a silver medal at the Paris Exhibition in 1889.

In 1895 he established his own workshop, called Frohe Art Glass, in Buffalo.

The Blue Chapel was built between 1912 and 1914, and housed the Order of the Perpetual Rosary which was started by Dominicans nuns who emigrated from France.

The monastery closed in 2008 when its last two nuns retired and moved to a hospice in New Jersey.

Father Andrew Vollkommer, the longtime pastor at Our Lady of the Lake, arranged that the eight windows be transferred to South Carolina in exchange for paying for the reburial of nuns who were interred on the property of the New Jersey monastery.

The windows were then restored at a Charlotte studio that specializes in stained glass.

It is said to mirror “the European Romantic-era style of artistic, musical, and religious philosophy that took the lofty, hyper rational ideals of the preceding period and brought them, in a sense, back to earth,” according to the Hudson (NY) Reporter.

“It was believed beforehand that nature and the body were imperfect and that spiritual enlightenment could only be achieved by rejecting one’s earthly experience,” according to the publication. “The Romantic era proposed that true spiritual revelation was achieved instead by embracing nature and human emotion.”

Unfortunately, the man so instrumental in bringing the windows to the new church, along with everything else associated with the elegant structure, wasn’t on hand to witness the dedication.

Father Vollkommer died in his sleep in late January at age 60, after overseeing nearly every aspect of the structure nearly through to completion.

In more than 20 years of shepherding the parish, Father Vollkommer helped it grow from 60 families to 800, so there was more than a tinge of sadness that he wasn’t on hand this past weekend to see the fruits of his labor.

However, it’s not often that any of us are able to leave a legacy that will last generations. Buried a short distance away, Father Vollkommer will remain figuratively and literally in the shadow of the new church for decades to come.