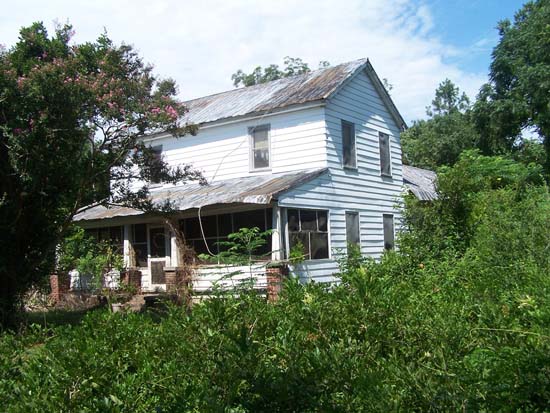 A 155-year-old structure located in rural South Carolina embodies the conflicted racial legacy evident in South Carolina and possibly other parts of the South, if not the nation.

The Jacob Bedenbaugh House, built around 1860, isn’t noteworthy for its age or its architectural style. Described as a detached two-story traditional “I” house with a modified L-shaped plan, the dwelling, in serious need of restoration, is located along a country highway about five miles east of Prosperity, SC.

What prompted the US Department of the Interior to the place the home on the National Register of Historic Places is the individuals who lived in the structure during its first 55-75 years.

Jacob Belton Bedenbaugh was a white South Carolinian born in 1833. His common-law wife Sarah Bedenbaugh, described as mulatto, was initially a slave purchased by Jacob. Sometime between 1860 and 1864, the two entered into a relationship.

Despite the increasing difficulties inherent with pursuing an interracial relationship in the Deep South in the years following the Civil War – not that it was a walk in the park during or before – the Bedenbaughs remained together in the house as a couple from at least 1864 until Jacob’s death in 1915 and had eight children.

But going against prevailing social mores didn’t come without a price. In July 1890, they were indicted and tried for “fornication” due to the fact that they living together. Being an interracial couple undoubtedly contributed to the decision to prosecute.

It’s unclear from a search of the Internet what the outcome of the case was, but one should bear in mind that South Carolina’s political climate was changing rapidly in 1890 as the Conservatives who had come to power in 1877 following the end of Reconstruction were about to be turned out of office by populist Ben Tillman, who was elected later that year, and his supporters.

Tillman, a virulent racist, was a leading force behind the state’s 1895 constitution, which solidified Jim Crowism in the state and, among other things, prohibited interracial marriage.

Legally, the couple could have married during the war, Reconstruction and immediate-post Reconstruction period, provided they had been able to find a minister willing to perform the service, but the Tillman Constitution forever barred Jacob and Sarah Bedenbaugh from being wedded.

Despite being brought into court on charges of fornication, it is worth noting that Jacob and Sarah Bedenbaugh were allowed to live out their lives in a rural region of the Deep South at a time when race-based lynchings were a very real threat.

Between 1877 and 1950, 164 blacks were lynched in South Carolina, according to a recent study by the Equal Justice Initiative. That works out to a little more than two a year, not as large as most other Southern states, but the peril of being lynched was an effective racial terror weapon.

Yet, despite the onerous nature of Jim Crow, the increasing codification of segregation and the enhanced racial stratification of Southern society, Jacob and Sarah Bedenbaugh were allowed to remain together, albeit most likely under the guise of employer and servant, rather than as a couple.

When one recalls the opposition that Civil Rights activists were met with in the 1950s and early 1960s, it seems inconceivable that such a relationship would have been allowed had Jacob and Sarah Bedenbaugh lived in say Selma, Ala., or Jackson, Miss., decades later.

In keeping with the segregated era in which they lived, the pair are buried in different cemeteries: Jacob in St. Paul’s Lutheran Church cemetery in nearby Pomaria; Sarah eight-tenths of a mile away in Mount Hebron African Methodist Church cemetery, also in Pomaria.