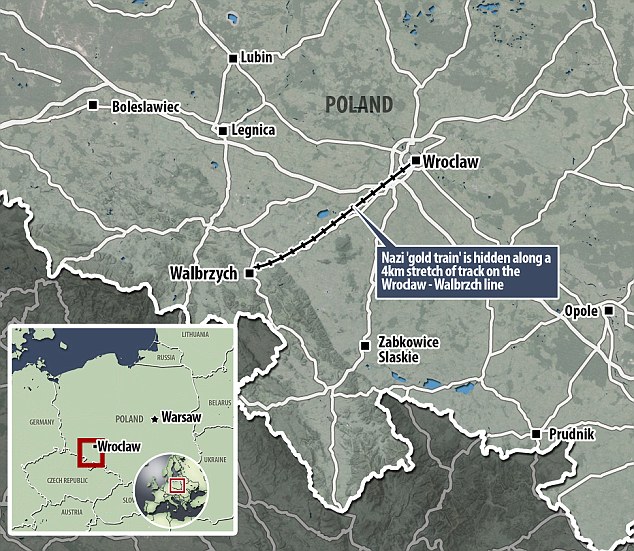 It now appears that, unlike many other accounts of Nazi-era loot uncovered inside mountains or deep in alpine lakes, last month’s report about the discovery of a World War II German military train, possibly buried with gold, gems and guns, may be true.

A Polish official said recently that ground-penetrating radar images have left him “99 percent convinced” that a World War II German military train is buried near the southwestern city of Walbrzych.

According to local legend, a Nazi train filled with gold, gems and guns went missing near the city in 1945, the BBC reports.

In addition, specialists at the Ksiaz castle, the nearby Polish fortress that Hitler intended to become his base of operations in Eastern Europe, believe at least two further undiscovered Nazi trains were in the area carrying unknown treasures.

Zuchowski did not reveal the location of the find but reiterated warnings to treasure hunters that the site may be booby-trapped.

Last month, a Pole and a German told authorities in Walbrzych that they knew the location of the armored train.

Andreas Richter and Piotr Koper appeared before the media last week and read a prepared statement, amid claims that the train’s existence was a hoax.

Zuchowski said information about the train had apparently come in a deathbed confession from a person involved in concealing it.

Adam Easton, with the BBC in Warsaw, said no documents have ever been discovered confirming the existence of the train but, between 1943 and 1945, Germany forced prisoners of war to dig more than five miles of underground tunnels near Walbrzych that were apparently to be used as factories.

The train was rumored to have been carrying gold from what is now the Polish city of Wroclaw as the Soviet army closed in at the end of World War II.

Polish military experts who saw the site said it must be cleared of trees and shrubs before any inspection, according to the Associated Press.