Researchers believe they may have found the remains of the man said to be the author of the first modern European novel, beneath the chapel of a cloistered convent in Spain.

Experts searching for the remains of Don Quixote author Miguel de Cervantes said earlier this month that they found wooden fragments of a casket bearing the initials “M.C.” containing bones beneath the Convent of the Barefoot Trinitarians in Madrid’s historic Barrio de las Letras, or Literary Quarter, according to the Associated Press.

Archaeologists are seeking to solve the centuries-old mystery of where the famed Spanish writer was laid to rest. The initials on a plank of the coffin were formed with metal tacks embedded into the wood.

While the bones of at least 10 people were found inside the niche containing the broken wooden planks of the coffin, some of the remains belonged to children.

Cervantes’ remains went missing in 1673 when work was undertaken at the convent. They were thought to have initially been taken to another convent before being returned, according to the Daily Mail.

Researchers are examining the bones to try to determine whether Cervantes’ are among them. Cervantes, who was 69 when he died in 1616, left several clues that should aid investigators with their probe, including:

Cervantes’ influence on the Spanish language is such that it is often called the “the language of Cervantes.”

His magnum opus, fully titled The Ingenious Gentleman Don Quixote of La Mancha, and published in two volumes in 1605 and 1615, follows the adventures of Don Quixote, a landless nobleman who has imbibed too many chivalric novels and lost touch with reality. In a bid to bring justice to the world, he turns knight errant, recruits a simple farmer, Sancho Panza, as his faithful squire, and roams the world in search of adventure.

Cervantes himself led a fascinating life. Born in 1547, he had by 1569 moved to Rome, where he worked as chamber assistant to a cardinal.

Cervantes then enlisted as a soldier in the Spanish Navy. Cervantes sailed on board the Marquesa, part of the galley fleet of the Holy League that battled the Ottoman fleet on Oct. 7, 1571, in the Battle of Lepanto, one of the great clashes in western history. 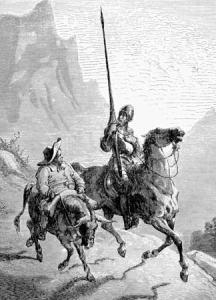 Cervantes had been stricken with fever but refused to stay below deck and requested to be allowed to take part in the battle. In ensuing battle, he received three gunshot wounds – two in the chest and one which rendered his left arm useless.

Afterward, Cervantes remained in a hospital in Messina, Italy, for about six months before his wounds were sufficiently healed to allow him to rejoin his fellow soldiers. From 1572-75, he participated in expeditions to Corfu and Navarino, and saw the fall of Tunis and La Goulette to the Turks in 1574.

In September 1575, Cervantes’ ship was attacked by Algerian corsairs. He was captured and would spend five years as a slave in Algiers, failing in several escape attempts, before being ransomed.

In his later years, Cervantes worked as a purchasing agent for the Spanish Armada and as a tax collector. He suffered bankruptcy and was imprisoned at least twice for irregularities in his accounts.

He published his first major work, La Galatea, in 1585. While he penned several other works, Cervantes remained poor until 1605, when the first part of Don Quixote appeared. The work did not make him rich, but it did bring him an international reputation as a man of letters.

(Top: Don Quixote and Sancho Panza in the Cervantes Plaza in Madrid.)