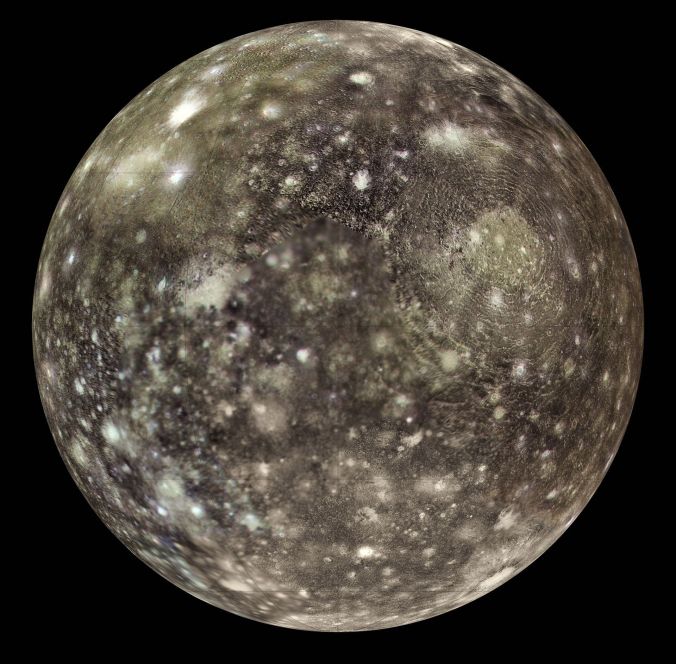 While it shares the exotic-sounding names of counterparts Europa and Ganymede, Jupiter’s second-largest moon Callisto is decidedly less glamorous.

For one thing, it has the notoriety of being the most heavily cratered object in the solar system.

The online publication RedOrbit describes Callisto as “similar in appearance to a golf ball,” adding that it “is covered almost uniformly with pockmarks and craters across its surface, evidence of relentless collisions.”

Callisto is also unusual in that it orbits at a distance of nearly 550,000 miles from Jupiter, much farther than the planet’s other large moons. Ganymede, by comparison, orbits nearly 500,000 miles closer to the red planet.

“This isolation means that Callisto does not experience any significant tidal forces from Jupiter that would tear at its structure,” according to RedOrbit. “It also does not show any signs of geological processes such as volcanism or plate tectonics, which we clearly see on moons that are involved in violent cosmic tugs-of-war with Jupiter, such as Io (Jupiter’s other large moon), Europa and Ganymede.

“Callisto remains relatively intact and is a witness of the early Solar System: its surface is the oldest terrain, at a truly ancient four billion years,” the publication added.

Discovered by Galileo Galilei in 1610, Callisto is the third-largest moon in the Solar System.

The above image was taken in May 2001 by NASA’s Galileo spacecraft, which studied Jupiter and its moons from 1995 until 2003.

The image suggests that the brighter parts of Callisto’s surface are mainly water ice, while the darker patches are regions of highly eroded rocky material.

We’ll get another chance to learn more about this lonely satellite before too long.

Next year NASA’s Juno spacecraft will arrive at Jupiter and begin beaming back images of the planet’s poles.

In 2022, the European Space Agency will launch Juice, short for Jupiter Icy moons Explorer, which will tour the area with the goal of expanding knowledge of the red planet and its environs, especially moons Ganymede, Europa and Callisto.