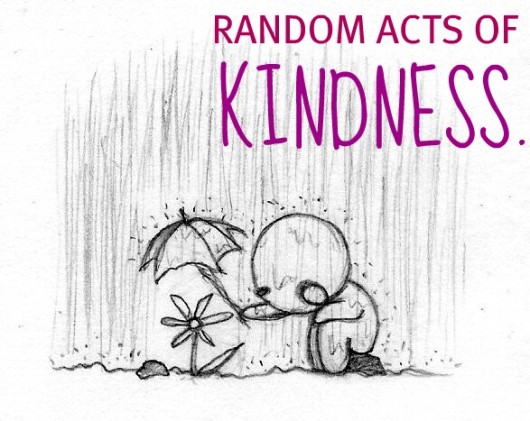 Call me Scrooge, Grinch, Mr. Heat Miser or whatever other holiday-related term of derision you like, but I long ago had my fill of such amorphous concepts as “paying it forward,” “giving back” and the always-inane “random acts of kindness.”

The above actions celebrate that which was once recognized as simple decency.

But in today’s world, where the navel-gazer is king, it’s not enough to be good to one another: Lack of recognition would almost appear to invalidate civility in the eyes of many.

First, the terms “pay it forward” and “give back,” logically speaking, make little sense.

You can’t pay something forward.  You can do something nice for someone without them knowing it – but, of course, if you crow about it, you’re really just serving your own purposes.

And “giving back” implies that you took something in the first place. Athletes, entertainers and corporate bigwigs like to throw around the term “giving back,” particularly when visiting their old stomping grounds.

Unless they had their athletic, entertainment or business talents conferred upon them, like royalty bequeathing a title on a noble, they probably had to work very hard over many years to reach their level of accomplishment.

A multi-millionaire football player, for example, likely spent thousands of hours lifting weights, running sprints and getting pounded on the practice field over the course of 20-plus years in order to earn the sum which now sits in his bank account.

If he wants to help others, great; but he doesn’t owe it to anyone to “give back.”

A friend writes much more eloquently of the odiousness of the concept of “giving back” in a piece in today’s Wall Street Journal (subscription required):

You can’t avoid the giving-back phenomenon, even when Christmas shopping online. Companies now routinely advertise their sense of ‘responsibility’ by offering customers ways to ‘give back’ – so instead of buying stuff like a soulless materialist wretch (to be handed over to your equally materialist friends or family), you can also give a dollar for breast-cancer research or animal rescue.

You’ll temporarily feel better about yourself, and the company gets credit for its humanitarian values, so everybody wins. But if you choose to ignore the silly ‘give back’ icon and move ahead with your purchase, you’ve got another tiny reason to feel morally inferior.

Maybe it’s all for the good, but I do wonder about the sheer smallness of much of it. A local radio show I heard recently brought in an ‘expert’ in giving back. Her counsel: If you can’t afford to donate money, try giving back in ‘little ways’ – such as grabbing a shopping cart on your way into the supermarket so the bag boy won’t have to do it. How strange that in our post-religious society, simple errands become fraught with notions of guilt and righteousness.

My friend included perhaps the most sanctimonious example of “giving back” that I’ve come across in a long, long time in his Journal piece. Not surprisingly, it’s from a politician, our state’s chief executive. He writes:

“I (recently) received a news release announcing a ‘Christmas Challenge’ issued by my state’s governor. ‘I want to challenge each and every family to do one random act of kindness,’ Gov. Nikki Haley wrote. ‘Whether it’s having a soldier for dinner because they (sic) don’t have a family nearby to go to, visiting a nursing home, or baking cookies for an elderly neighbor, each act of kindness can help affect our state for the better. If every family in South Carolina commits to doing this, we would have 5 million kind acts across our state. How special would that be?’”

Speaking of special, here’s a couple of things that would make my day:

One, that my governor understood her state has 5 million residents, rather than 5 million families; and

Two, that the populace as a whole might be willing, for even a short time, to go about their lives without looking to be patted on the back and having their praises sung to the high heavens for doing what, a couple of generations ago, would have been considered nothing more than common courtesy.

(Top: A random act of kindness. Unfortunately, the plant needed water and died soon after the well-intentioned but dim-witted soul left.)

14 thoughts on “Nothing beats being dragooned into decency”