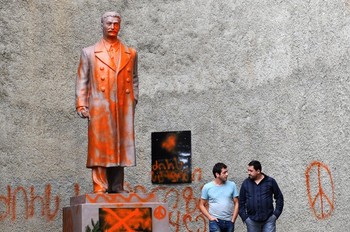 One wouldn’t imagine that there’d be much controversy over how a tyrant who orchestrated the deaths of tens of millions of individuals would be regarded in his native land.

Not so in former Soviet republic of Georgia, where Joseph Stalin died 60 years ago.

When Stalin loyalists restored a statue of the former Soviet leader recently on a hilltop overlooking the provincial town of Telavi in eastern Georgia, it was quickly attacked by vandals, who covered it in paint and scrawled slogans on the wall behind it, one of which read, “Stalin is a murderer.”

The incident – the latest of several in the past year – highlights not only the deep political divisions in Stalin’s homeland but also a struggle over his legacy, according to Agence France-Presse.

“Some sort of nostalgia for Stalin still exists in a certain segment of the Georgian society,” political analyst Gia Nodia said.

The Telavi monument was torn down several years ago as part of staunchly pro-Western President Mikheil Saakashvili’s campaign to eradicate all traces of Georgia’s Soviet past.

Stalin, born in 1878, was a Bolshevik revolutionary who took part in the Russian Revolution of 1917. He managed to gain control of the Soviet leadership following Lenin’s death in 1924 and held power until his own death in 1953.

Among his actions, he deported millions to the Gulag, where many died, and relocated many others to remote areas of the vast Soviet empire.

His agricultural collectivization policies are blamed for disrupting food production and contributing to the catastrophic Soviet famine of 1932–1933, called the Holodomor in Ukraine, which claimed as many as 8.5 million lives.

In the mid- to late-1930s, he instituted the Great Purge, in which hundreds of thousands of so-called “enemies of the state” were executed, including many former Bolshevik revolutionaries and high-ranking military leaders.

In August 1939, he entered in a non-aggression pact with Nazi Germany that divided their influence within Eastern Europe.

Within a couple of weeks of Germany’s invasion of Poland, Stalin also attacked the Central European nation, and later signed off on the Katyn Massacre, in which approximately 22,000 Polish nationals were killed by the Soviets in an attempt to eliminate the nation’s intelligentsia.

As World War II wound down, Stalin began to set up puppet regimes in many Eastern European nations, creating the Iron Curtain that would last for more than four decades.

Last October, Saakashvili’s party lost in parliamentary elections, with a coalition led by billionaire Bidzina Ivanishvili, who has made normalizing relations with Russia his foreign policy priority, winning a majority.

Since then, Stalin monuments have been erected in several villages, but all have suffered a fate similar to the Telavi statue, with each being quickly defaced, Agence France-Presse reported.

With Ivanishvili now prime minister and Saakashvili preparing to step down as president when his second and final term ends next month, analysts say the changes have emboldened conservatives who believe the time is right to rehabilitate Stalin, according to the wire service.

“When a party, which has been pursuing an active de-Sovietization policy has been replaced in power by politicians who were flirting with Stalinist sentiments during the electoral campaign, those who are nostalgic about the Soviet past reckoned that their time has come,” Nodia said.

Shota Lazariashvili is the self-proclaimed president of Telavi’s Stalin Society who was behind restoring the hilltop monument of his “idol.”

Stalin, to him, embodies the social justice he feels was lost amid the political turmoil and economic hardship that followed the Soviet Union’s collapse.

“We miss his truth and justice,” said the 63-year-old, standing under a framed portrait of Stalin in his crumbling office as he launched into an ecstatic ode to the “great leader.”

Lazariashvili flatly rejects Stalin’s responsibility in the death of millions of Soviet citizens in brutal Gulag prison camps and the forced collectivization of agriculture.

While Prime Minister Ivanishvili said he remains “cautiously negative” about the dictator, his culture minister has endorsed plans to resurrect a giant Stalin monument in the courtyard of the Stalin museum in his hometown of Gori.

The statue, erected in 1952, stood in Gori’s central square until it was torn down in 2010 on the orders of Saakashvili.

Zurab Butskhrikidze, the vice chairman of Telavi’s city council, said some groups feel more relaxed about expressing views they were forced to hide under the previous government.

He supports the continuation of so-called “de-Stalinization” policies, but through education, rather than draconian measures.

“Some people from the old generation still are under the Soviet propaganda’s influence. We can’t do anything about this by force, we need to step up information efforts,” he said. “Our whole society failed to repent for what happened in Stalin’s era.”