My 2013 Mess with Nature Tour found me in a small churchyard in a neighboring South Carolina county this past weekend, where I came across a clutch of killdeer eggs and one very aggravated mama killdeer.

Prior adventures this summer in the never-ending quest to snare (and release) God’s creations include catching a baby turkey, catching and being bitten by two separate black snakes, catching but not being bitten by any of half a dozen Eastern box turtles, being outsmarted by several baby moorhens, along with numerous run-ins with lizards, skinks and anoles.

The latest occurred while I was in a quiet graveyard off a two-lane state highway. The cemetery, enclosed by a beautiful old stone wall, was without trees and had little vegetation except grass.

As I wandered about, an adult killdeer about 15 feet in front of me suddenly began plying its “broken-wing” routine, squawking and struggling to keep its balance.

Thinking there were babies about, I quickly scanned the area, but saw none. With nothing but headstones in the graveyard I knew there was nowhere to hide, so I determined there must be a clutch of eggs somewhere close.

I scoured the ground along a 20-square-foot patch of ground, but found nothing, so I then tried a bit of triangulation, seeing which movement caused the killdeer to come back toward me most rapidly.

However, she was noncommittal, being equally noisome no matter which way I moved.

Killdeer with eggs. Note how well eggs blend in with surrounding environment.

After a few minutes, I opted for a different tactic and moved about 100 feet away, beyond a large pillar.

After a short time I poked my head out and saw the killdeer in the same general area as before, but stationary.

I began walking toward her.

She began her act again, this time though with more flair. I proceeded exactly to where I’d spied her and found a nest and four eggs. Until I had walked up upon the eggs, they were practically invisible, they had blended in so well.

The nest was nothing more than a slight depression on open ground. Nothing lined it.

It sounds Spartan, but without any structure to stand out from its surroundings, the nest blended in almost perfectly with its surrounding area. The eggs themselves resembled stones, adding to the camouflage effect. 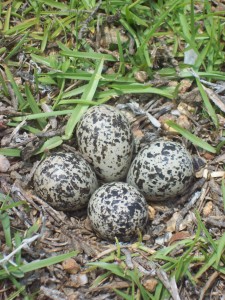 When I found the nest, the mother bird – brownish-tan and white, with black bands and a hint of an orange rump – came within two feet of me, howling and flapping.

She tried to draw me away repeatedly. After a few photos of her, her eggs and her together with her eggs, I moved off.

Within a few moments, she was back on her nest, undoubtedly relieved I was gone.

I’m not familiar with the cognitive skills of killdeer, but for me it was another event I won’t soon forget.

(Top: Irate killdeer tries to distract author from her nest.)