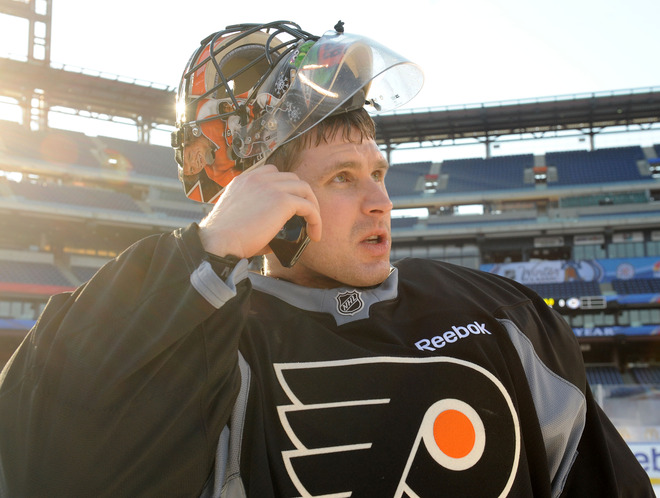 Ilya Bryzgalov is a better at hockey than history – fortunately for him.

The Philadelphia Flyers goaltender recently raised some eyebrows when he said he could “see logic” in actions taken by Joseph Stalin during the dictator’s vise-like rule over the Soviet Union.

Bryzgalov, a native of the Russian city of Togliatti, on the Volga River, recently gave an interview to the Russian sports outlet Championat in which he was questioned on his views on Stalin, who had many millions killed between 1922 and 1953.

“Positive. I see logic in his action,” Bryzgalov said, according to a translation by Yahoo!’s Dmitry Chesnokov. “Not without going too far, of course. But he came to power in a country that had just lived through a revolution. There were so many spies, enemies, traitors there. A lot of people still had guns after the civil war. The country was in ruins, (people) needed to survive somehow. The country needed to be rebuilt, and in order to do that it needed to be held in iron hands.

“… He knew what he was doing. He is described as a ‘bloody tyrant.’ But at the time it couldn’t be any other way. Yes, there were innocent people who were victims of repression. But it happens.”

This may be nit-picky, but a word of advice to whichever public relations firm is advising Bryzgalov and/or the Flyers: when discussing the deaths of millions, avoid phrases such as “but it happens.”

Lest one think Bryzgalov is some wet-behind-the-ears rookie just off the boat from Novosibirsk, he’s a 10-year veteran who’s played in 425 NHL games, posted more than 200 victories and recorded 30 shutouts.

“But it happens.” A cemetery for victim’s of Stalin’s Gulag in far Northern Russia.

In other words, he’s old enough to know better. Heck, he’s even got a degree from a Russian university.

From time to time one reads of elderly Russian pensioners who say they yearn for the days of Stalin, when there was order and their country was respected.

Some of these are veterans of the Red Army and no doubt recall a time when they were part of vaunted and feared military force, one that played the key role in defeating Nazi Germany.

It’s a little easier to give a pass to the elderly whose memory may not be what it once was, or who may not have been aware of Stalin’s abuse, or may not have wanted to be made aware.

But a 30-something who has access to an endless supply of history at his fingertips thanks to modern technology and his lucrative paycheck? Inexcusable.