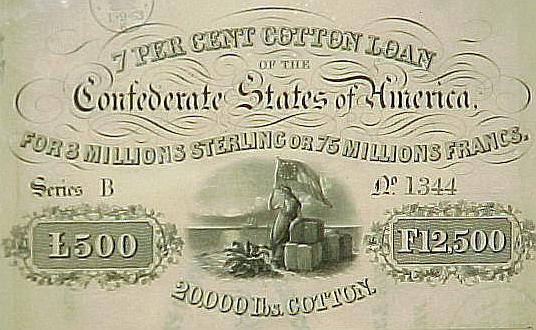 The depth and breadth of the New York Times’ Disunion series never ceases to amaze. The articles focus on the War Between the States, but go far beyond examinations of battles and leaders, delving into an amazing array of topics, including the medical, legal and financial aspects of the 1861-65 period.

Recently, Disunion, which is written by a variety of historians, academics and other individuals knowledgeable on specific aspects of the war, focused on the ingenious concept of cotton bonds, financial instruments issued by the Confederacy in 1863.

In January of that year, the Confederate Congress secretly authorized bankers at the noted Paris-based financial house of Erlanger et Cie. to underwrite $15 million of Confederate bonds, to be denominated in British pounds or French francs.

“But unlike ordinary bonds backed only by the faith and credit of the issuing country, at the option of the holder an Erlanger certificate could be converted into a receipt for a pre-specified quantity of cotton,” Phil Leigh writes for Disunion.

This was important because Confederate currency was all but worthless in Europe at that point of the war.

The conversion rate for the cotton bonds was fixed at 12 cents a pound, regardless of the commodity’s market price, at the time about 48 cents. In addition, the bonds paid a 7 percent annual interest rate.

“Put another way, a buyer of a £1,000 bond could convert it into 80 500-pound bales of cotton worth almost £4,000,” according to Leigh. “If the price of cotton continued to rise, the underlying bonds’ conversion-value would climb in lockstep. European investors flocked to the bonds, including the future British prime ministers William Gladstone and Lord Cecil.”

But there was a sound reason why the bonds had the potential for such a lucrative return: the cotton was located inside the Confederacy, which was in the grip of an ever-tightening Federal naval blockade.

Investors had to take delivery of the cotton in the Confederacy, according to EH.net, a site operated by the Economic History Association.

Upon conversion of the bonds, Confederate authorities were obligated only to deliver the cotton bales to a point within “ten miles of a navigable river or railhead,” where the new owner must arrange transport to the final destination, Leigh writes.

Erlanger, ever the enterprising operation, saw an opportunity and founded the European Trading Company, really little more than a blockade-running line for its bondholders.

“For a fee, the company’s ships would pick up the cotton, slip past Union warships and deliver it to Cuba,” Leigh writes. “The service wasn’t cheap, though, and so while a few rich investors made use of it, the majority had to take another avenue: hoping the Confederacy would win the war. Consequently, the market price for the bonds fluctuated in response to the successes or failures of Confederate armies.”

Still, the bonds were a hit, largely because of the cotton-conversion option.

The $15 million offering was oversubscribed with orders for $80 million.

However, Erlanger knew it had the cash-strapped Confederacy over a barrel. The company not only earned a commission of 5 percent, it was allowed to purchase the bonds at 77 percent of face value and then resell the initial issue at 90 percent of face.

“In other words, nearly a fifth of each investor’s money would be siphoned off by the Erlanger syndicate as middlemen,” according to Leigh. “Despite the immense demand for the bonds, Secretary of State Judah Benjamin accepted the deal only because, he figured, it would make European financiers financially invested in Confederate success.”

The so-called Erlanger Loan was issued in five European cities – London, Liverpool, Paris, Amsterdam and Frankfurt – on March 19, 1863, and raised more than $8.5 million, according to the Institute of Nautical Archaeology at Texas A&M University.

The bonds did well at first, rising from their 90 percent offering price to 95 percent in market trading.

Unfortunately for the Confederacy, though, initial buyers were required to deposit just 15 percent of the purchase price, with the balance not due until the settlement date in late April 1863.

Union diplomats in Europe took advantage of the period between when the bonds came to market in March and the settlement date the following month to plant doubts about whether the bonds would be honored.

Shortly before the settlement date, stories appeared in London newspapers about how years earlier Confederate President Jefferson Davis had publicly defended Mississippi’s default on a bond issue mostly held by Europeans when he was a US senator from that state.

“Erlanger panicked and threatened to cancel the offering – while keeping its commission guarantee – unless the Confederacy agreed to stabilize the price by using some of the deposited funds to buy bonds on the open market,” according to Disunion.

In the end, it is believed that Erlanger and the Confederacy each retained about $3 million from the issue.

The Confederacy used its share of the bond proceeds to purchase munitions and to make deposits on oceangoing ironclads, ships that were unable to be delivered before the war’s end.

The price of cotton bonds remained surprisingly high for a good part of the remainder of the war, perhaps in part because Confederate agents like James Mason encouraged rumors that the bonds would be honored no matter the outcome, according to the Institute of Nautical Archaeology at Texas A&M University.

Thomas Dudley, the US consul at Liverpool, noted the naiveté of local merchants when it came to the cotton bonds: “As strange as it may seem,” he reported to Secretary of State William Seward, “these people here who are aiding the Rebels and (have) taken or purchased these bonds think if worse comes, and the Union is restored that the United States Government will assume the payment of their bonds.”

Of course, that didn’t happen. One of the provisions of the 14th Amendment, ratified in 1868, was that the United States would not assume nor pay any debt or obligation incurred in aid of insurrection or rebellion against the United States.

By the conflict’s conclusion in spring 1865, the cotton bonds were worth approximately 10 cents on the dollar. Still, the South honored the provisions of the debt issue for the entire war, according to HT.com.

Erlanger appears to be the party that made out best; in addition to the approximately $3 million it made on the debt issue, its European Trading Company proved somewhat successful. Its chief vessel completed 73 round trips between Mobile and Havana before running aground in May 1865.