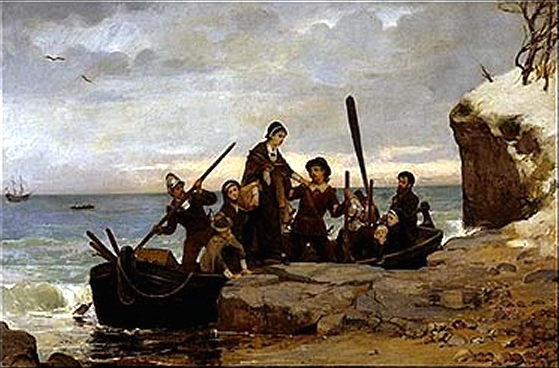 Plymouth Rock, the purported landing place of the Mayflower pilgrims on their voyage from Europe to the New World in 1620, remains among the most enduring symbols of American history.

Located in Plymouth Harbor, Mass., it is reputed to be the spot where the pilgrims who founded Plymouth Colony disembarked from the Mayflower on Dec. 21, 1620, and continues to be visited by tens of thousands of tourists annually.

However, whether the large boulder actually played any part in the famed landing is questionable.

Surviving records from the period do not mention the rock, and, in fact, the story comes from a third-hand account that wasn’t recorded until 1832, more than 200 years after the Pilgrims landed in America.

The legend of Plymouth Rock stems from a 1741 incident, according to the Baltimore Sun.

“Hearing that a wharf was planned to be built over the rock in Plymouth harbor, Elder Thomas Faunce, a 95-year-old Mayflower descendant, asked to be carried in his chair down to the harbor,” the Sun reported. “As recorded in the ‘History of Plymouth’ (1832), he pointed out the rock and told those assembled that he had been assured by his father that this was the very rock that ‘had received the footsteps of our fathers on their first arrival and which should be perpetuated to posterity.’”

The rock was, it is said, spared as a result of Faunce’s intercession, with the wharf being built without covering it.

“Without Faunce, you don’t have anything,” James Baker, a historian for Plimoth Plantation, the modern recreation of the Pilgrim village, told the Sun.

Of note is that Faunce’s father arrived at the colony in 1623, more than two years after the Mayflower landing, and Faunce himself was born in 1647. 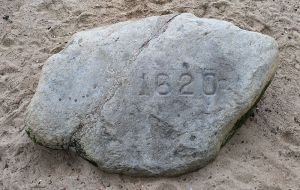 However, Faunce insisted that not only his father but several of the original Mayflower passengers identified the precise rock to him when Faunce was a youth.

While the first recorded mention of Plymouth Rock’s role in the Pilgrim’s landing doesn’t occur until the 1832 History of Plymouth, it appears that by the time of the American Revolution, the rock was already venerated as important symbol.

In 1774, the rock was move back from the shore, during which time it split in half.

The upper portion of the rock was later relocated from Plymouth’s meetinghouse to Pilgrim Hall in 1834. Fifteen years later, the Pilgrim Society began building a canopy over the lower portion of the rock.Following the structure’s completion in 1867, the top of the rock was moved from Pilgrim Hall back to its original wharf location in 1880 and rejoined to the lower portion. The date “1620,” still visible today, was carved into the rock.

During the rock’s many journeys around Plymouth, numerous pieces were taken by souvenir seekers, and today approximately one-third of the top portion remains.

Of course, the story of Plymouth Rock being the original landing place of the pilgrims is in and of itself bunkum.

More than a month before the passengers of the Mayflower set foot on what would become Plymouth Colony, they landed on Cape Cod, in what would later be called Provincetown Harbor.

However, “it soon became apparent that the tip of the cape was not an ideal spot for a settlement,” according to the Sun. “The sandy soil was not well suited to agriculture and the November cold on the unprotected spit of land was bitter.”

In addition, there was insufficient fresh water – a continuing problem even today.

From a high point on the Cape, some of the Mayflower passengers could see across Cape Cod Bay.  On Dec. 6, a small boatload of men left the Mayflower and crossed the bay in search of a more hospitable place to settle.

An exploration of the area proved satisfactory and on Dec. 16 the Mayflower delivered her passengers to their new home, which became the Plymouth colony, thus indirectly beginning the legend of Plymouth Rock.