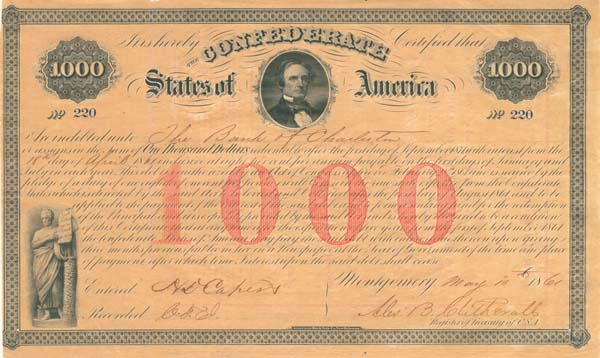 What follows took place during the presidency of Chester A. Arthur, but when one happens across stupidity of a colossal nature – no matter how long ago it occurred – it deserves to be recognized.

A Sumter, S.C., newspaper called the Watchman and Southron in November 1881 detailed the story of a Georgia man who had $400,000 in Confederate bonds in his possession. He’d purchased them during the war and was being offered 5 cents on the dollar for them, which was probably not an unreasonable offer at the time.

At that price, the individual could have realized about $2,000 in US money, no small amount in those days, particularly given the overall state of the Southern economy less than two decades after the close of the War Between the States.

The man responded to the offer by stating that he was not only not interested in accepting 5 cents on the dollar, he wanted full value.

“I have a part of a wagon load of Confed. securities but am holding them for $1,000 per thousand,” he wrote in late 1881. “I expect that one of these days that my children will get the full amount of my Confed. money back, together will all my bank stocks. More unpromising things have come to pass.”

Of course, there’s no way to know what he or his heirs ultimately did with the Confederate bonds, but even as collectors’ items today they’re not worth close to face value. 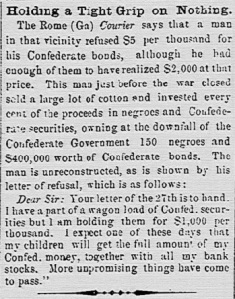 One wonders if this crank’s descendants still have an old wagon of dusty Confederate paper sitting in a barn somewhere, and every so often they go out, pull the blanket from it, and rub their hands in glee, anticipating the day when someone finally meets their price.

And lest one think that this individual was simply an unreconstructed Southerner unhappy with the war’s outcome who was cutting off his nose to spite his face, think again.

Though not identified by name in the Watchman and Southron’s story, it readily becomes apparent that the Georgian was no newcomer to bad business decisions.

“This man just before the war closed sold a large lot of cotton and invested every cent of the proceeds in negroes and Confederate securities, owning at the downfall of the Confederate Government 150 negroes and $400,000 worth of Confederate bonds,” according to the article.

Let’s see, it’s late 1864 or early 1865. The Confederacy is obviously in a heap of trouble. Georgia itself is being, or has been invaded by William T. Sherman’s marauding troops. The entire Confederacy is collapsing, militarily and economically. Oh, and it’s pretty apparent that slavery is no longer going to be around once the war is over, should the inevitable happen and the South be defeated.

So this 19th century wastrel dumps what money he has into Confederate bonds and slaves? Brilliant.

Could this be where the writers for the television program The Simpsons got the great bit for a 1997 episode in which gazillionaire C. Montgomery Burns is shown going over his stock portfolio and asks his lawyer, “And … Confederate Slave Holdings? How’s that holding up?” To which the attorney responds, “It’s … um … steady.”

Oh, how the modern-day Nigerian scam artists would love to have gotten their hooks into this curmudgeon.