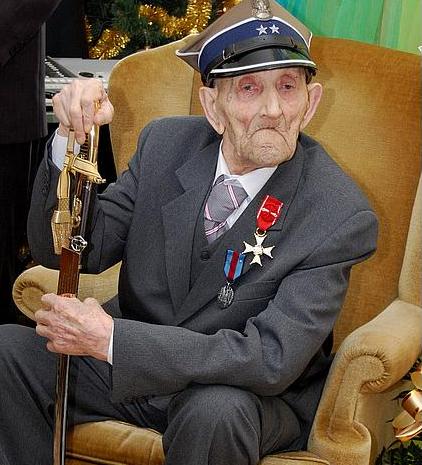 More than 90 years after first enlisting, a 112-year-old Polish officer has been promoted to captain.

Poland’s Defense Ministry said on Friday that Józef Kowalski, a veteran of both the 1919-21 Polish-Soviet War and World War II, had been promoted from lieutenant to captain.

In a statement, the ministry said that Defense Minister Tomasz Siemoniak visited Kowalski in a nursing home in Tursk, in western Poland, on Thursday to award him his promotion, according to The Associated Press.

Kowalski was born Feb. 2, 1900, in what was then the Austro-Hungarian Empire. He fought in a Polish cavalry unit formed during World War I, the 22nd Uhlan Regiment, but given that Kowalski is not listed as a veteran of the Great War, he apparently did not see action during the bloody 1914-18 conflict.

Kowalski is listed as the only survivor of Poland’s victorious war against Bolshevik Russia, which broke out in February 1919. It said that after the war he studied at a cavalry school but chose to return to his family farm.

The Polish-Soviet War pitted the newly formed Soviet Russia and Soviet Ukraine against the Poland and the Ukrainian People’s Republic.

Poland had just had its statehood re-established by the Treaty of Versailles, after spending nearly 125 years being partitioned – originally by Russia, Prussia and Austria – until the end of World War I.

Polish forces were looking to secure their borders and, ultimately, their independence, while communist forces were trying to spread revolution into other parts of Europe.

Ultimately, Russian forces were defeated. However, Polish efforts at an eastward invasion of Ukraine and Belarus were equally unsuccessful.

Though little known in the west, the Polish-Soviet War resulted in the deaths of more than 100,000 soldiers, according to historians.

In 1939 Kowalski returned to combat, fighting the Germans, but spent most of the war a prisoner as the Nazis quickly overran Poland in the war’s opening weeks.

One thought on “Polish veteran, age 112, promoted to captain”