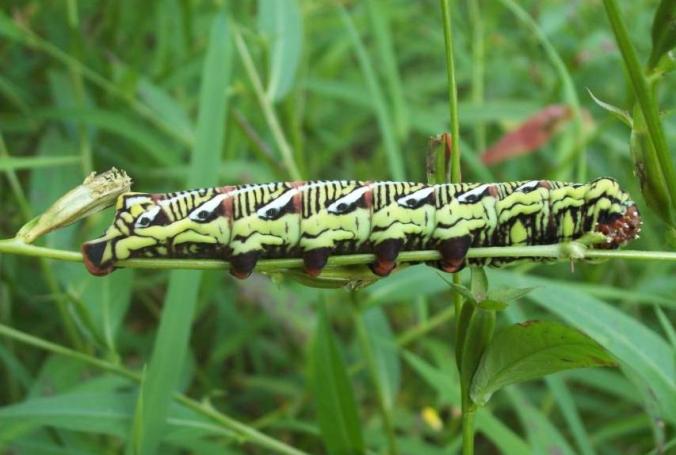 Swimming recently in the Tyger River along the Union County-Newberry County border, my kids and I came across half a dozen Black Swallowtail butterfly caterpillars.

They were quite spectacular, provided insect larvae are your thing.

The small group we found were feeding on what appeared to be Virginia snakeroot located along the riverbank.

The Black Swallowtail is a black butterfly with yellow markings near the margins of the forewings and hindwings, and more limited blue and red markings on the hindwings, according to a description by the Texas A&M Extension Service. Its wingspan can reach 4-½ inches.

Black Swallowtails, which happen to be the state butterfly of Oklahoma, emerge from the chrysalis stage in the spring and females lay eggs on the leaves of host plants, which include snakeroot, pipevines and even fennel.

Each time it sheds its skin new patterns and colors appears.

Also, as the caterpillar molts, it eats its skin. It’s hard to know whether to be impressed or disgusted by this fact; the economy is certainly admirable, but a distaste for insect exoskeletons curtails enthusiasm.

An interesting protective device possessed by black swallowtail caterpillars is its osmeterium. Located behind the caterpillar’s head and usually concealed, it’s orange, forked and releases a foul smell in an effort to repel potential predators.

While we spotted few Black Swallowtails butterflies during our day on the Tyger River, the fact that were no shortage of Swallowtail caterpillars ensures that there will likely be plenty of butterflies come next spring.

(Above: Black Swallowtail butterfly caterpillar, seen along the Tyger River.)