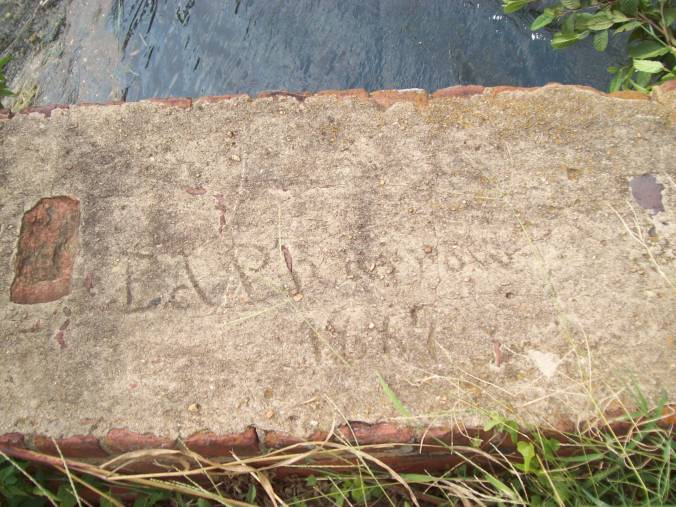 While graffiti has existed since ancient times, with examples dating back to at least the 5th century BC, it’s often considered a trend that’s only truly taken hold over the past half century.

And whether it’s the result of popular culture, such as movies featuring run-down subway cars rumbling along while covered with an often spectacular array of unintelligible words and phrases, or television programs featuring slum housing coated with spray-painted symbols and gang markings, graffiti indeed seems to many to be a part of post-modern life.

However, a trip to Augusta, Ga., recently proved that the urge to memorialize one’s name on a public edifice is a trend that goes back long before the Baby Boom Generation learned to scrawl its name on the side of dilapidated buildings.

While walking near the end of the first of the Augusta Canal’s first three levels, at 13th Street and Walton Way, one comes across a set of headgates that regulate water flow into the second part of the canal.

Near the righthand side of the canal, just in front of a cyclone fence used to block access to potential trespassers, is a small group of bricks that slope up from the water at 45 degree angle.

This brick embankment is covered with a relatively thin coat of cement, into which is etched “Ed Pharrow 1869”.

Because the Augusta Canal was originally built between 1845 and 1847 to move goods such as cotton past a rocky stretch of the Savannah River, it’s certainly possible that the graffiti in question in more than 140 years old.

But what was more convincing was the lettering style. It’s a large script that slants slightly backward, similar to other lettering common around the time of the War Between the States.

The words themselves aren’t easy to make out at first, thanks to 14 decades of heat, cold and rain. But closer inspection shows proof of someone who, apparently, felt the need to, more likely than not, take up a stick and leave a reminder of their presence.

A cursory search of the Internet shows nothing for anyone named Ed Pharrow, at least not for an Ed Pharrow who would have had the ability to engrave his name along the Augusta Canal during Reconstruction. That’s not surprising given how long ago we’re talking about.

As such, we may never know whether Ed Pharrow was a worker, possibly an ex-slave, enlisted to help shore up the banks of the canal; a foreman, perhaps an ex-Confederate officer, who wanted to leave his mark on a project he was overseeing; or maybe a youth who slipped in unnoticed after others had left to take advantage of some wet cement and seize of a bit of immortality.

Whatever the case, 142 years later, Ed Pharrow lives on, if ever so faintly – a fading reminder of a long-gone era.

(Above: The name “Ed Pharrow” and the date “1869” can still be faintly seen etched in a bit of cement along the Augusta Canal.)

2 thoughts on “Pondering the enigma of 142-year-old grafitti”