After weeks of anticipation, I finally came across my first sighting of Brood XIX, the periodical cycle of cicadas that has been making itself heard from Kansas to the Deep South.

Of course, cicadas are regular visitors to most any wooded region of South Carolina during the spring and summer months, but what makes this year special is the arrival of a species that emerges in massive numbers after 13 years in a juvenile period.

Periodical cicadas are unique in their combination of long, prime-numbered life cycles (13 or 17 years), precisely timed mass emergences, and active choruses, according to the website Magicicada Central, which is chock full o’ information on periodical cicadas.

For the most part, there’d been little cicada activity of note, at least that I’d seen or heard around the Columbia Midlands. 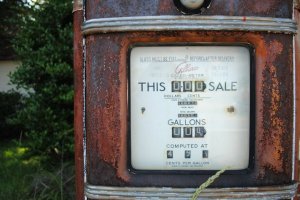 But last week, while out with my son on the Old Prosperity Highway north of Batesburg-Leesville, we stopped so he could take photos of an old rusted gasoline pump (which last dispensed regular gas at 49-1/2 cents a gallon).

After a couple of minutes we heard an odd buzzing off in the distance and started walking down a dirt road. We saw a small pond through a thicket of pine trees and trudged in.

The drone was off in the distance, so we inspected the pond for a few minutes, looking for signs of life (i.e. a place where we might catch some fish).

As we walked around the back side of the pond, we stopped again to get a different view. The buzzing was still off aways, in some indiscernible direction.

As I looked down, I spied among a thick layer of pine straw what appeared be part of snake skin, with the sun glinting off it, so I reached down. It was, I realized as my fingers touched it, a cicada wing.

I then saw the shell of a cicada larva a few inches away. It had the same hollow body and sharp legs that used to give me a fright as a kid, though for some reason we referred to them as locusts.

As I mentioned to my son that it was the first cicada shell we’d found all year, I noticed a dead adult cicada, then another, and another. Soon, we noticed scores of them scattered among the pine straw – all within a perhaps a five-square-foot area.

It was only then that we looked at the underside of the leaves around us. There were hundreds of cicada larva, their shells attached to anything they apparently had been able to get purchase on. They were also on tree trunks, vines, branches and even roots.

Curiously, we saw just a single live cicada, on a branch about 12 feet above us. When I threw a branch up at it, it took flight, most likely to join the rest of his compatriots off in grove somewhere, out of my range of vision.