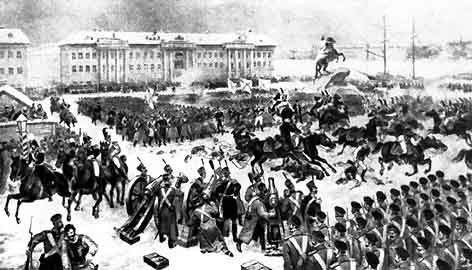 On this date 185 years ago, some 3,000 Russians revolted against Tsar Nicholas I in the Decembrist Uprising. Like most insurrections aimed at reforming the Russian government, it failed miserably.

It could have also cost the country its greatest poet, Alexander Pushkin, had he not already gotten himself in trouble with the tsar’s government prior to the rebellion.

The Decembrist Revolt came about after liberal-minded Russian army officers became concerned when Constantine, in line for the Romanov throne following the death of Alexander I in November 1825, chose to marry a commoner and relinquished his claim to the crown.

Not only was Nicholas seen as being more conservative than Constantine, Alexander’s abdication note was only made public after his death in 1831. The confusion left many rebels feeling that Nicholas had cheated Constantine out of the throne.

In addition, the rebels, known as Decembrists because of the month of the revolt, wanted a freer Russian state, with a federal government and constitution, instead of an autocratic government ruled by a tsar.

Events came to a head on Dec. 14, 1825, when a group of officers commanding about 3,000 men assembled in Senate Square, outside the Winter Palace in St. Petersburg, where they refused to swear allegiance to Nicholas, proclaiming instead their loyalty to Constantine and a constitution.

After a lengthy standoff between the 3,000 Decembrists and 9,000 loyal tsarist troops, Nicholas appeared in person and sent Count Mikhail Miloradovich, a respected military hero, to talk with the rebels.

While delivering a speech, Miloradovich was shot and fatally wounded by officer Pyotr Kakhovsky. At the same time, a Decembrist squad entered the Winter Palace but failed to seize it and retreated.

Finally, after numerous fruitless attempts to parley with the rebels, Nicholas ordered a handful of artillery pieces to open fire, with devastating effect. The rebels broke and ran.

Some attempted to regroup on the frozen river Neva, to the north. However, here, too, they were targeted by the artillery and suffered many casualties.

As the ice was broken by the cannon fire, many of the dead and dying were cast into the river. After a final mopping-up operation by loyal army and police units, the revolt ended with a complete tsarist victory.

By the time the Decembrist Revolt rolled around, Pushkin had made a name for himself, both as a writer and a subversive.

Born in 1799, he was a famous poet by age 18. Pushkin, who would go on to write Eugene Onegin, gradually became committed to social reform while still relatively young and emerged as a spokesman for literary radicals.

While still young, he began composing political poems and satirical verses and epigrams directed against the tsar and his government.

Not surprisingly, these eventually came to the tsar’s attention and around 1820 he was sent into exile in southern Russia, first in Bessarabia, then in Odessa. Further indiscretions brought about his transfer to his mother’s estate in northern Russia.

For six years – from 1820 to 1826 – he was cut off from society, from cultural life, from his friends and from his family. It also likely kept him from taking part in the Decembrist Revolt, according to The Daily Telegram.

“Though he was not a member of the conspiracy – its leaders considered him too irresponsible – he would certainly have joined the rebels on Senate Square and, if not mown down by grapeshot, would have been either executed or exiled to Siberia,” the paper wrote.

Still, some of the insurgents in the Decembrist Uprising had kept some of his early political poems amongst their papers, which didn’t help his position.

By September 1826, Nicholas summoned him to Moscow, releasing him from exile. While Pushkin would always be grateful, his freedom was only relative.

“The secret police kept him under surveillance, opening and reading his correspondence,” according to The Daily Telegraph. “He could travel nowhere without the tsar’s permission and, though he constantly requested leave to visit Europe, it was as constantly refused.”

Nicholas even went so far as to act as Pushkin’s personal censor, according to a 2003 review of a Pushkin biography by the Richmond Times-Dispatch. That didn’t do a whole lot for his career.

Pushkin had written what became his most famous play, the drama Boris Godunov, while at his mother’s estate but could not gain permission to publish it until five years later. The drama’s original, uncensored version would not receive a premiere until 2007.