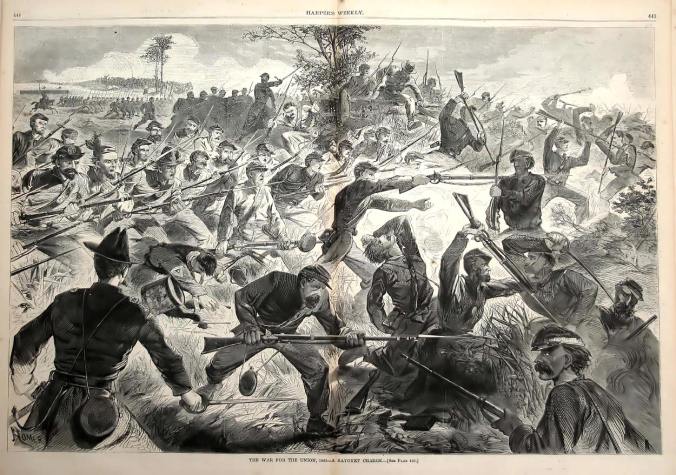 Looking over images of hand-to-hand combat during the War Between the States, one might suppose there could be little that was more gruesome or painful than a bayonet wound.

Afterall, getting a 21-inch piece of sharpened metal rammed into your body by a frenzied foe seems a whole lot worse than catching a minie ball or shell fragment from afar.

Not so, blogger Dick Stanley writes over at 13th Mississippi Infantry, according to information published in a Confederate medical journal in 1864.

“Our knowledge of bayonet wounds has been so limited,” Confederate surgeon Simon Baruch wrote in the July 1864 edition of the Confederate States Medical and Surgical Journal, “that their effects have been, until a recent period, involved in considerable doubt and even mystery.

“Experience, however, teaches that we have exaggerated the nature of these injuries and attributed to them formidable qualities which they happily do not possess,” Baruch wrote.

“Why is it that soldiers have such a wholesome fear of the bayonet … This dread of ‘cold steel’ is, in my humble opinion, mainly attributable to ignorance of the nature of the injuries inflicted by it … bayonet wounds are almost harmless when compared to the ploughed tracks which the terrible minie [bullet] bores through the tissues,” he added.

“A bayonet wound almost invariably heals … and leaves no deformity behind, while the simplest ball wound requires weeks for a complete recovery and, then, perhaps, leaves the sufferer with a contracted and useless limb.”

Bayonet wounds were very rare during the Civil War. In Patricia Spain Ward’s 1991 biography Simon Baruch, Rebel In The Ranks of Medicine, 1840-1921, she argues that bayonet and saber wounds “together accounted for only 0.4 percent of the total wounds inflicted on both sides,” according to Stanley.

Baruch was an interesting fellow. A native of Germany, he came to the US in 1855 and settled in Camden. Stymied in his homeland in his desire to study medicine, the profession quickly opened up for him in the antebellum South with the help of local Jewish physicians.

He studied medicine at the South Carolina Medical College and the Medical College of Virginia and graduated from the latter in 1862, just in time to take part in the War Between the States, according to the New York Times.

He became a surgeon on the staff of Confederate general Robert E. Lee and was captured twice during the conflict, the second time on the final day of the Battle of Gettysburg.

Following the war, he practiced medicine for 16 years in Camden before moving to New York, where he died in 1921.

He had four children, including famed financier Bernard Baruch.