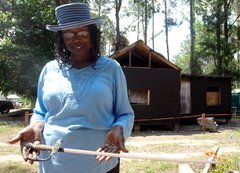 A worker reroofing an aging shanty in Hilton Head last weekend came across a sword possibly owned by a freed slave who fought for Federal forces during the Civil War.

Marty Jansen was crawling in the attic of an 80-year-old splintering, rotting house that organizers hope to turn into the Gullah Museum of Hilton Head Island when found a sword emblazoned with the military insignia of the Grand Army Republic, the Union army from the Civil War.

“Our jaws dropped when he told us there was a sword in the attic,” Carrie Hirsch, Gullah Museum treasurer, told the Hilton Head Island Packet. The volunteers called Louise Miller Cohen, director of the Gullah Museum and the house’s owner.

The home belonged to Miller Cohen’s uncle, Bubba Duey. She thinks the sword was given to Duey by his grandfather, William Simmons, who served in the Union Army.

The sword is not thought to have been used in combat but was made soon after the war as a historical replica. Duey hid the sword in the attic for safekeeping, thinking no one would find it there, Miller Cohen told the publication.

Miller Cohen doesn’t want to sell the sword, saying she prefers it have a permanent home in the museum.