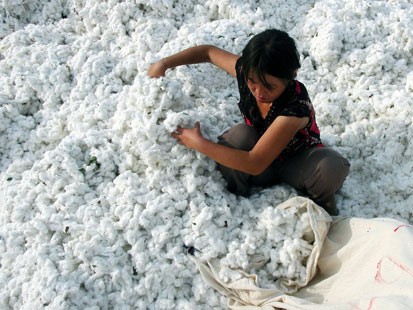 Cotton prices have jumped after the Indian government announced recently it would enact a $56-per ton duty on raw cotton exports in a bid to check the rising price of the commodity in that country.

The export duty on raw cotton has been levied for six months, an official in the textile ministry said. India’s domestic textile industry has been lobbying for cotton export restrictions in the wake of steep rise in prices of the fiber, according to Nationwide International News.

“In-country prices in India had gotten unreasonably high for the textile mills,” he said. “They used their political power to sway the government.”

The announcement had more of a price impact on old crop than new crop cotton futures, but both have been affected, noted Cleveland. “Even over the last few months, we’ve seen old crop prices rise over new crop prices by about 3 to 1, so without a doubt, it’s pulling new crop along with it,” he told the publication.

Cotton prices had already been on the move upward, thanks to the fact that demand for cotton products had weathered the economic recession as well or better than most consumer goods and the reduction in world stocks of cotton over the past two years.

Nationwide, US cotton producers intend to plant 10.5 million acres in 2010, which is 15 percent higher than last year and the first increase following three straight years of declines.