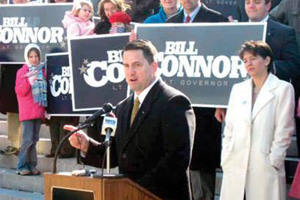 Back in April, Columbia attorney Bill Connor issued a press release in which he welcomed Rock Hill developer Ralph Norman into the SC lieutenant governor’s race and said he looked “forward to running a hard but clean campaign.”

Apparently, Connor either has a short memory or a serious misunderstanding about what constitutes “clean.”

Over the past few months, he or his campaign have tried unsuccessfully to get covert competitive intelligence on a fellow candidate from a politically connected nonprofit, attempted to block a potential competitor from speaking at at least one county convention and attempted to smear other candidates by calling bloggers to let them know who hadn’t filed campaign disclosures.

Regarding the latter, blogger Earl Capps explains the antics of one Connor staffer:

I wasn’t really bothered by the lack of disclosure. Since it’s so early in the campaign, the candidates have spent little money. I doubted that they’re hiding a whole lot at this stage in the game.

However, I was trying to figure out what he was doing calling me at my office. NOBODY calls me at my work, nor have I invited anyone to call me there, and I certainly don’t need – or want – to drag politics into my workplace.

When I recently asked the candidate about this, he didn’t seem concerned that his campaign took the first negative shot of the campaign, nor that they tried to play me for a fool. In fact, he didn’t seem to understand why I would have a problem with what was done.

Hopefully, this isn’t a sign of things to come in the race for Lieutenant Governor, but if the mud is already being thrown a year out over things this petty, who knows what’s next?

With the primary still nearly a year away, one has to wonder what Connor is so worried about that he’s already reaching into his bag of dirty tricks? Is it that he realizes his campaign is built on a foundation of sand, or is he instead hiding some deep, dark secret? Perhaps it’s both.

One thought on “Bill Connor: Do as I say, not as I do”